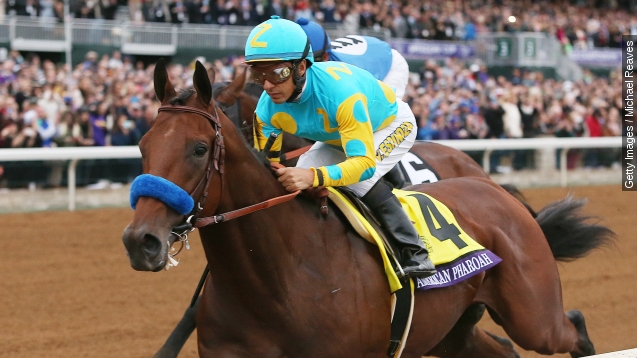 Horse racing icon American Pharoah is leaving the racing world at the top. The colt took first in his final race at the Breeders' Cup Classic winning $5 million.

Trainer Bob Baffert told ESPN, "I'm so proud of my staff. There's a lot of pressure training a horse like this and I'm happy for all the fans here, all of America; they love this horse. He did it the right way."

All in all, American Pharoah has won nine of his 11 races and after winning the Kentucky Derby, Preakness Stakes and Belmont Stakes becoming the first horse to do so since 1978. (Video via NBC)

"That historic victory in horse racing, American Pharoah finishing first at the Belmont Stakes and winning The Triple Crown," ABC's Tom Lllamas said on World News Tonight after the win.

There's no doubt American Pharoah has helped bring horse racing back into the mainstream after the sport faced declining attendance and drug controversy. It will be interesting to see how the sport fares as the colt hangs up his horsehoes.

According to NBC Sports, he's earned more than $8.6 million for his owner during his career and is now headed to a breeding farm in Kentucky.