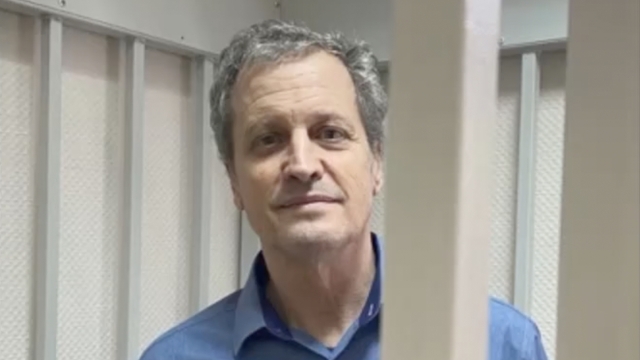 On a snowy November day in Missoula, Montana, Anne Fogel awaits Thanksgiving visitors, but her mind is on another family member — more than 5,000 miles away.

"He loves Russia, they loved it," said Fogel.

"He's taught diplomatic children from all over the world for 36 years, close to that," she said.

At 61 years old, Marc and his wife Jane spent the last decade in Russia teaching at a diplomatic school that’s part of the American, British and Canadian Embassies. The Fogels decided on one more year abroad. But when they arrived at an airport in Russia — a shock.

"Apparently, there had been an informant. And the informant had tipped them off at the airport security that he would be coming through," Anne said.

What did they find? Less than 20 grams of medical marijuana prescribed to Marc Fogel. He told the Russian authorities it was for lifelong chronic pain from a back injury, after multiple failed surgeries.

They didn’t think Fogel would be there longer than six months.

"And then, of course, Russia invaded Ukraine. We knew that it was a totally different ballgame at that point," Anne continued.

In June, a Russian court sentenced Fogel to 14 years in a maximum security penal colony for "large scale" cannabis smuggling.

"In researching this, we found cases of large-scale drug leaders of drug trafficking organizations who got lower sentences than Marc did. We found a case, not only one case — somebody got 10 years for murder. And Marc got 14 years," said Tom Firestone, Fogel's attorney.

Marc Fogel's case is parallel to Griner’s in many ways, but along with less national attention — there’s one stark difference.

The U.S. State Department requested that Fogel be released on humanitarian grounds because of his poor medical condition, but stopped short of designating him as "wrongfully detained."

Firestone said that designation could make a difference.

"I think it brings more attention to the case, it lends credibility to our claims that he is being treated wrongfully, condemns the wrongful actions of the Russian government, it frees up resources which the State Department can then use to get him out. And also it gives the family greater access to the process," Firestone said.

Griner is designated as wrongfully detained, and so is American Paul Whelan, who is serving a 16-year sentence for espionage-related charges his family disputes. Both Whelan and Griner have been mentioned in talks of a proposed prisoner swap with Russia, but not Fogel.

A letter to Secretary of State Antony Blinken, signed by nine bipartisan senators in August, lays out the case, saying Fogel meets six of the 11 established criteria to be designated as wrongfully detained.

"The United States cannot stand by as Mr. Fogel wastes away in a Russian hard labor camp," it reads. It calls on the U.S. to give Fogel's case the same amount of political attention and diplomatic intervention as Griner's. In late October, another bipartisan letter to the Biden administration from both houses of Congress, with more urgency asking them to consider immediately classifying Fogel as wrongfully detained and to help bring him home.

"We certainly think that he should be included, together with Paul Whelan and Brittney Griner. That's not to say that his case is worse than theirs or they're better than — they should all be included," said Firestone.

A State Department spokesperson wouldn’t comment on this specific case, but said they’re continuously reviewing the circumstances surrounding the detentions of U.S. nationals overseas. Sen. Bob Casey Jr. of Pennsylvania received more details in a September letter from the State Department. It says they continue to communicate concerns about Fogel's case to the Russian government and that wrongful detention determinations can take time.

"My mother is really old. I think that she really needs to hear from her government that they are doing everything they can to get her son out," said Anne Fogel.

Earlier this month House Representative Guy Reschenthaler of Pennsylvania introduced a resolution of inquiry that would direct the Biden administration to provide the U.S. House with all documents related to the State Department’s review of the  Fogel case.

There are over 50 Americans that are wrongfully detained in several countries, and many wonder why is it hard to negotiate their release.

Former U.S. Ambassador to Russia Michael McFaul has also called for Fogel’s release on social media. Fogel taught the then ambassador’s son, who detailed his admiration for his former teacher in a Twitter thread.

"He has touched lives all over the world. And they know him. He should not be there," said Anne Fogel.

Last month, Marc Fogel started his transfer to a penal colony 15 months in and nobody in his family had talked to him beyond translated letters through the prison system. Then a few weeks ago an unexpected phone call. First to his wife and then his boys.

NEWSY'S MARITSA GEORGIOU: Bet the boys were thrilled to hear his voice.

ANNE FOGEL: Oh my god. Yes. I think they talked about the Steelers. He doesn't want to alarm anyone any more than they are alarmed.

On the morning of our interview Marc called Anne for the first time since his arrest.

"I knew when I saw number seven that it was coming from Russia. I said, I have a news interview. 'Really?' he said, 'over what?' I said, over us. Yeah. And this isn't the first one. I think that made him — It really opened his eyes. That he's not alone," said Anne.

Anne says her brother is in the dark about many things, including the war in Ukraine.

"He doesn't have any grasp of the point in history that he's in," said Anne.

The Fogels hope the next chapter in history means their brother, their husband, their dad and their son makes it back home.