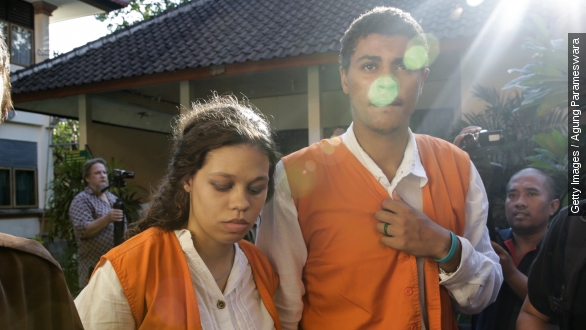 SMS
American Couple Sentenced In Bali Suitcase Murder
By Jake Godin
By Jake Godin
April 21, 2015
An American couple in Indonesia have been found guilty and sentenced for the gruesome suitcase murder of a mother last August.
SHOW TRANSCRIPT

An American teenager and her boyfriend have been found guilty for committing the gruesome suitcase murder of her mother last August.

Heather Mack, 19, and her boyfriend Tommy Schaefer, 21, were both issued jail time on Tuesday in an Indonesian court. (Video via NTDTV)

Prosecutors had reportedly sought a 15-year sentence for Mack from the start but, The Washington Post writes, the three-judge panel gave her a lighter sentence because of her newborn baby. Schaefer’s apparent remorse led to a more lenient sentence for himself.

Both Schaefer and Mack are from Chicago. Last August they were arrested shortly after the body of Mack’s mother was found badly beaten and stuffed in a suitcase which they placed in the back of a taxi cab in Bali, Indonesia. (Video via ODN)

The daughter and her mother reportedly had a troubled relationship, with police being called to their Chicago residence on multiple occasions after the father passed away in 2006.

Chicago station WMAQ reports Mack is now trying to access a $1.3 million trust fund. Attorney’s representing her infant want to secure a portion of it for the baby’s financial future while Mack has requested funds from it to help pay for legal fees and living expenses.