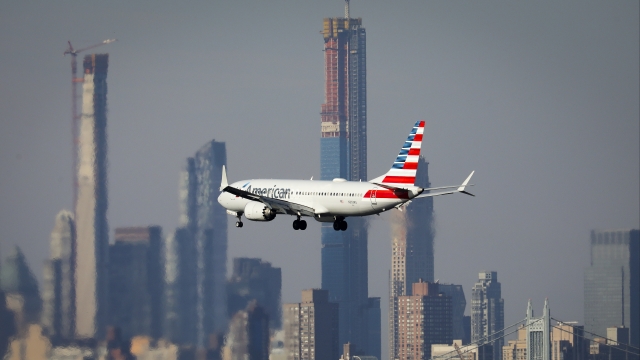 SMS
American Airlines Reaches Settlement With Boeing Over 737 Max
By Alec Larson
By Alec Larson
January 8, 2020
The airline reached an agreement with Boeing on compensation for financial damages incurred from the worldwide grounding of the 737 Max jet in 2019.
SHOW TRANSCRIPT

American Airlines says it has reached a confidential agreement with Boeing on compensation for financial damages incurred from the worldwide grounding of the 737 Max jet in 2019.

While the terms of the settlement are unknown, American's CEO Doug Parker announced that a portion, potentially upwards of $30 million, will be placed in a profit-sharing program and distributed to employees in March 2020.

Parker said in a statement: "Despite the ongoing challenges the grounding has brought, American Airlines team members continue to do an incredible job ... and it was important to us that we get a deal done before the end of the year."

American had previously removed the 737 Max from its schedule through early April, and late last year announced an expected loss of $540 million in pretax revenue for 2019. According to the airline, discussions with Boeing involving damages from the grounding of the jet are expected to continue throughout 2020.

Boeing's 737 Max has been grounded worldwide since March 2019 after two deadly crashes involving the aircraft occurred within months of each other. Those crashes killed more than 300 people combined.

American Airlines is not the first U.S. carrier to come to an agreement with Boeing over the 737 Max grounding. Southwest Airlines previously reached a settlement with the company in December.