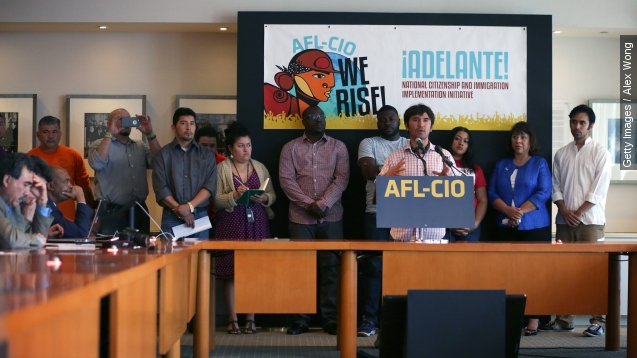 SMS
America's Strongest Labor Unions Still Have Political Power
By Christian Bryant
By Christian Bryant
September 7, 2015
Labor union membership has declined for decades, but some of America's strongest unions could play a big role in the 2016 election cycle.
SHOW TRANSCRIPT

U.S. labor union membership has been declining for decades, but some of America's strongest unions could play a big role in this election cycle.

Labor unions — groups that represent workers and fight for things like better pay, benefits and working conditions — fell out of favor with Americans after the Great Recession. According to Gallup research, the overall approval of unions dropped to its lowest point in 2009. (Video via ABC)

Many writers say unions lost members and influence over the years as unionized industries, like manufacturing, shrank.

Now, the perception of labor unions is on the upswing, and the slight improvement in favorability comes at a time when America's most powerful unions could have a major impact on the 2016 presidential election.

Some GOP candidates, like Jeb Bush and Chris Christie, have railed against teachers unions, specifically. (Video via Jeb Bush)

"They're not for education for our children. They're for greater membership, great benefits, greater pay for their members," Christie told CNN.

Christie was referring to the American Federation of Teachers, one of the largest U.S. labor unions.

The New York Times reported in April teachers unions, like the AFT, have ramped up the fight against standardized testing. This comes as Congress works to revise the No Child Left Behind Act — a big issue with teachers unions.

While some GOP candidates are working against unions, Democratic candidates want endorsements from them. The Service Employees International Union, another one of the nation's largest unions, is fighting for raising the minimum wage to $15.

Politico reports some members of that union want to delay endorsing a Democratic candidate because of a rift between Hillary Clinton supporters and Bernie Sanders supporters. The union could take up the endorsement issue when they meet later this month.

In the same vein, the president of the nation's largest trade union organization — the AFL-CIO — said the group likely won't endorse a Democratic candidate before the New Hampshire primary in February.

The candidate who gets that endorsement will be backed by a spending giant. The AFL-CIO is an umbrella organization for 56 different unions and is a major political donor. According to the Center for Public Integrity, the AFL-CIO spent $26 million on federal lobbying between 2007 and 2012 and gave $7.4 million to super PACs during the 2011-2012 election cycle. (Video via AFL-CIO)

Although labor unions have had waning memberships, the largest unions in the U.S. still wield enough power to potentially influence legislation and political outcomes in 2016.