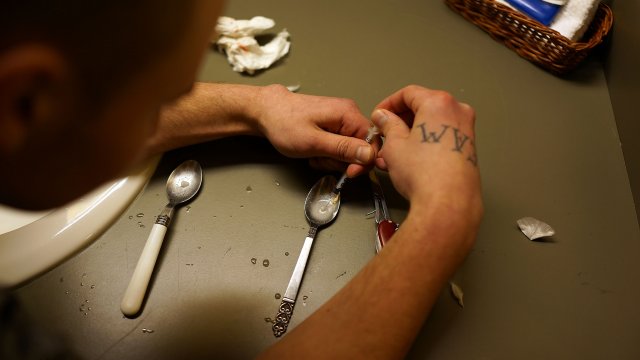 SMS
America's Opioid-Related Deaths Go Beyond Mexican Heroin
By Christian Bryant
By Christian Bryant
January 10, 2019
The president is right: Most heroin in the U.S. comes from Mexico. But that's only a portion of America's struggle with opioid-related deaths.
SHOW TRANSCRIPT

In his first Oval Office address, President Trump used America's opioid epidemic to help build his case for a barrier along the U.S. southern border with Mexico, saying this:

"Our southern border is a pipeline for vast quantities of illegal drugs including meth, heroin, cocaine, and fentanyl. Every week, 300 of our citizens are killed by heroin alone. Ninety percent of which floods across from our southern border."

But while it's true that the majority of heroin entering the U.S. is from Mexico, it's important to note that it's arriving through legal ports of entry — like this one connecting Juarez, Mexico, and El Paso, Texas. A barrier wouldn't stop that.

And the issue of opioid deaths is more complex than just stopping what's coming from our southern border.

For one, more people are dying from heroin-related overdoses partially because of fentanyl, a powerful synthetic opioid mainly manufactured in China.

"Some drugs like fentanyl or some derivatives of fentanyl, like carfentanil and things, are hundreds, if not thousands, of times stronger than heroin."

That's Northwestern University professor and opioid expert Richard Miller. He says when heroin is cut, or mixed, with fentanyl, the results can be deadly.

A recent CDC report found that in 2016, fentanyl was the drug most often involved in overdose deaths.

On the back end, there's a way to prevent people from dying during overdoses: it's called naloxone, a medication that can reverse the effects of an overdose.

"We know that we can save a lot of these people. And you have to get the antidote into the hands of people who can administer it. I mean, even policeman or whatever cops … The cops in all parts of the city and the suburbs should have access to that, and then they could do a lot better job saving these people."

The Department of Health and Human Services has emphasized the importance of making naloxone more accessible to prevent opioid-related overdose deaths.

"We have seen communities across our nation visited by an unfortunate opioid addiction and fatalities related to opioid use."

And cities like Washington, D.C. have even developed strategic plans to combat the opioid epidemic.

On the front end, China has pledged to help stem the flow of fentanyl and fentanyl-related products to the U.S. by categorizing them as a controlled substance.

So, President Trump didn't lie about the shocking number of recent opioid deaths — but he didn't tell the whole story, either. According to health professionals, America needs more comprehensive solutions, like greater access to naloxone and stricter fentanyl regulation, to curb these deaths — not a barrier on the southern border.