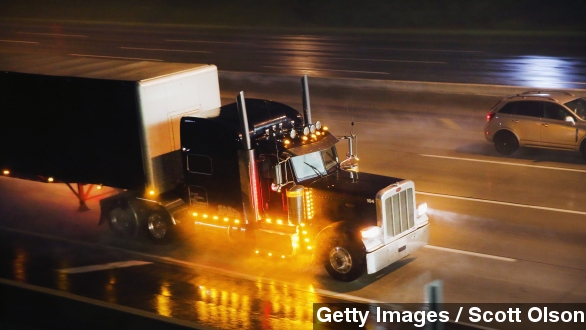 SMS
America's Most Common Job? Truck Driving
By Matt Picht
By Matt Picht
February 9, 2015
NPR used U.S. census data to chart the most common jobs in every state for the past few decades, and truck drivers came out on top in 29 states.
SHOW TRANSCRIPT

Apparently, America is now a nation of truck drivers.

NPR looked at census data and tallied up the most common jobs in each state from 1978 to 2014. The findings show truck driving has steadily become more and more common across the U.S.; it's currently the dominant profession in 29 states.

Which might explain why Forbes crowned "retail salesperson" the most common job in the U.S. last month. That outlet used 2013 data from the Bureau of Labor Statistics, which tracks data on sales and management jobs in more detail than the Census Bureau does.

Second, the U.S. Census' definition of "truck driver" includes delivery people as well as big-rig drivers, so the category is a bit more inclusive than some of the other jobs.

All that aside, what makes trucking such a popular industry? NPR suggests it has something to do with two big economic trends of the past few decades: globalization and automation.

As the world's economies have grown more connected, quite a few industries have moved overseas. But if there's one field that can't be outsourced, it's truck driving.

And the rise of the machines has also caused several industries to decline. This has most notably affected secretary work, which has fallen dramatically since its heyday in the '80s.

Trucking has weathered this trend, since computers can't drive 18-wheelers. At least, not yet.

Beyond the truck-driving craze, NPR's data paints a familiar picture. Technological advancements drain away farming and manufacturing jobs, while new occupations like software developer and computer analyst are on the rise.