America Is About To Have A Third-Party Nominee: Gary Johnson 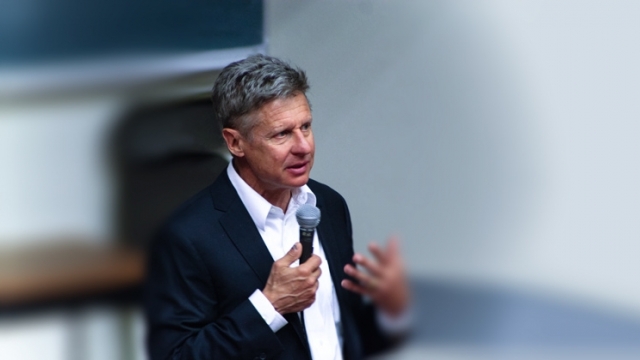 This Memorial Day weekend, former New Mexico Gov. Gary Johnson is expected to become the Libertarian Party's nominee for president. And Johnson's clinching of the nomination might have a bigger effect than you think.

Johnson served two terms as governor of New Mexico and left office in 2003.

This is Johnson's second presidential run after being on the Libertarian ticket in 2012. He got over 1.2 million votes — less than 1 percent of the total popular vote.

As for which current presidential candidate Johnson could pull voters from? According to an online political quiz, he says he's most like Vermont Sen. Bernie Sanders.

"I side with myself 99 percent of the time, but then the next politician that I most align with is Bernie Sanders at 73 percent," Johnson explained on MSNBC.

Registration for the Libertarian Party is up, and so is its fundraising. And it seems a lot of that steam is going to Johnson. In a recent Fox News poll, 10 percent of people said they'd vote for Johnson if it were him, Clinton and Trump on the ballot.

One way he could raise his political profile is on the debate stage. To get a spot, he needs to be: constitutionally eligible — check, on the ballot in most states — check, and polling at 15 percent. That's what he's missing right now.

The Commission on Presidential Debates will determine the qualified candidates after Labor Day. So Johnson has a little over three months to drum up more support in the hopes of landing on the debate stage alongside the Democratic and Republican nominees.