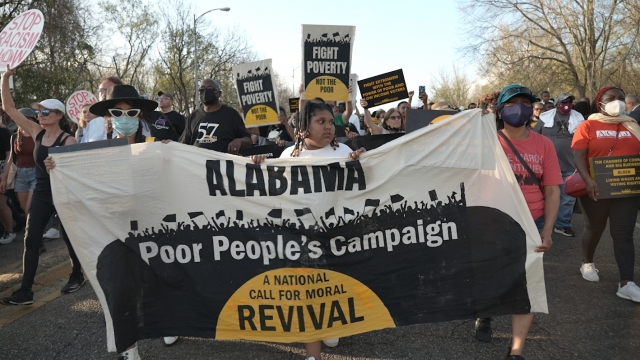 A strong chant — and powerful history — guide this group of hundreds of people across one of Alabama's most notorious landmarks, the Edmund Pettus Bridge.

Alabama native Annie Kynard Hackworth says several of her family members were part of the 600 peaceful protesters beaten up by state and local lawmen for daring to protest the right to vote.

"On 'Bloody Sunday,' which was March 7, 1965, five of my siblings was on the bridge. I remember my mother being in the kitchen crying, praying to God, hoping her children was OK, that they survived. And as a little child, 10 years old, you remember that. You carry that with you for the rest of your life," said Hackworth.

Local laws in some states prevented Black people from voting, even though the federal government had already guaranteed that right. Hard swings from billy clubs and tear gas left many with serious injuries. This is how "Bloody Sunday" got its name.

"Four of those siblings of mine, they won't come back, they haven't been back to the bridge since. My brother James that lives in Illinois, he can't stand to talk about it. He doesn't watch movies like 'Selma,' he doesn't watch that. He's still sore," said Hackworth.

It would take two more attempts before thousands of protesters made it to Montgomery's Capitol. President Lyndon B. Johnson signed the Voting Rights Act into law that same year. Now in 2022, Shanedris Holston, whose parents taught her about the importance of this day, is passing that knowledge down to her child.

"I have a young Black son that has to grow up in the United States of America, right. I feel as though it is imperative for him to understand where he came from so he can know where he is going," said Holston.

"When he circles back around, and we get to the seeds that I'm sowing right now, I want to be there. I want to be there to celebrate as well, and walk with him on this very bridge again, I hope," Holston added.

Powerful history, not easy to forget. Many in this crowd hope the next generation continues where they left off.