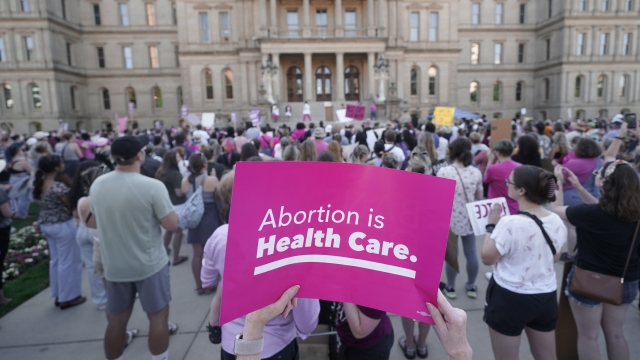 Abortion is shaping up to be one of the most important issues of next month's midterm elections.

And in five states, reproductive rights will be directly on the ballot.

"What drives me to vote was really simple. There were three: It was health care, education and the economy. But all of a sudden, this blindsided me, the Roe v. Wade (reversal)," said Freddy Portillo, a California resident.

California, Vermont and Michigan are each voting on constitutional amendments that would guarantee a woman's right to get an abortion.

"California and Vermont have very progressive laws on abortion that really support access to care, if those laws were changed to be more restrictive, then the state constitution could would say no, in fact, you actually have to keep these policies in place because our constitutions protect abortion rights," said Elizabeth Nash, a state policy analyst with the Guttmacher Institute.

Abortion rights advocates say a constitutional amendment in Michigan is particularly important. A law from 1931 banning abortions has been blocked by a state court judge, but the ruling could still be appealed.

"It's really easy to change a state law, but it's really difficult to change a state constitution. So I think in all of these states, what you're seeing are residents of the state and supportive state lawmakers who want to ensure that out into the future, abortion will remain legal and accessible," said Elisabeth Smith, the director of state policy and advocacy for the Center for Reproductive Rights.

Without any federal protection for reproductive rights, it's votes for state and local officials that can have the biggest impact.

In Kentucky, the proposed amendment says abortion is not protected by the state constitution. Abortion advocates are currently fighting the state's near-total ban in court, but that fight could become moot if voters say yes.

"If the constitutional amendment is approved by voters and the language that this constitution doesn't protect abortion is added, it would mean that that litigation would essentially be over," said Smith.

In Montana, a ballot initiative passed by the state legislature will ask voters to require doctors to provide medical care for infants born alive after an abortion.

"The impact could be around abortion later in pregnancy, where it may have a chilling effect on people who are having a health condition and need an abortion and the provider may have to take into account this law before they provide that care," said Nash.

If the initiatives in California, Vermont or Michigan are approved, they will become the first states in the country to explicitly protect abortion access in their state constitution.