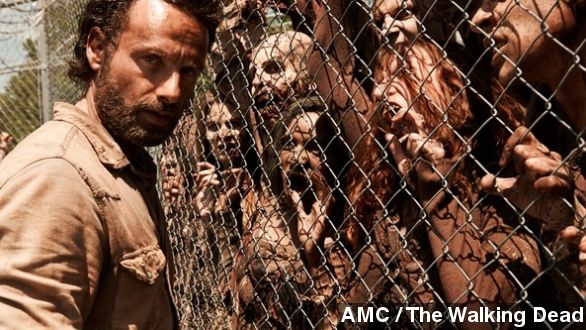 By Candice Aviles
March 29, 2014
Sources report Dave Erickson, who worked on "Sons of Anarchy," will join Robert Kirkman to work on the new show.
SHOW TRANSCRIPT

Zombie lovers you’re in for a treat. AMC has confirmed a "Walking Dead" companion series is in the works, and now we now know a little more about it.

This is the first we’ve heard from AMC on the subject since they hinted at a spinoff last September. But technically the untitled series isn’t a spinoff because it’ll have a new cast and location. (Via AMC / The Walking Dead)

What we do know is "Sons of Anarchy" producer Dave Erickson will executive produce the new show and co-write with "The Walking Dead" creator Robert Kirkman. Erickson’s also recently worked on Low Winter Sun. (Via FX Network / Sons of Anarchy)

But the setting for the new series is still a mystery. Maybe New York, LA, another country … here at Newsy? (Via Google)

Well at least we know it won’t be in Georgia, something IGN confirmed with Kirkman back in October. Kirkman says differences in backdrop will help the show stand on its own.

A Hollywood Life reporter is pleased about both the show's new cast and location.

Either way "Walking Dead" fans seem eager to get their hands on more of a good thing. But when it comes to plot details, besides the go-to assumptions about zombies and the end of the world, mums the word.