U.S. Ambassador To The EU Gordon Sondland To Testify Wednesday 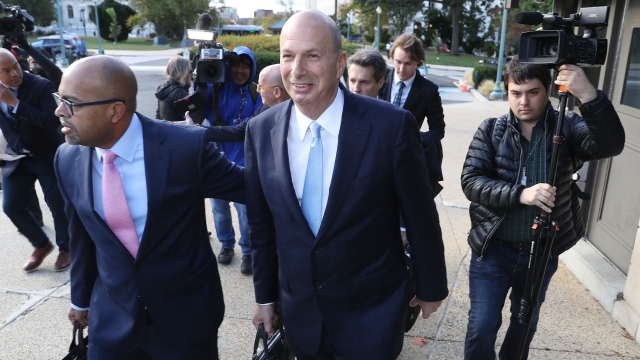 SMS
U.S. Ambassador To The EU Gordon Sondland To Testify Wednesday
By Ahmed Jawadi
By Ahmed Jawadi
November 19, 2019
Sondland was asked to testify shortly after the release of the whistleblower complaint regarding President Trump's call with the Ukrainian president.
SHOW TRANSCRIPT

Gordon Sondland, the U.S. ambassador to the European Union, is set to publicly testify this week for the next round of impeachment hearings. Here's some background:

After Donald Trump won the presidency in 2016, Sondland, best known then as the co-founder and CEO of the Provenance Hotels chain, donated $1 million to the president's inaugural committee. Fast-forward to May 2018: President Trump selects Sondland to be the next U.S. ambassador to the EU, a role that had been vacant for more than a year.

Sondland was in Kyiv on July 25, the same day as the phone call between President Trump and Ukrainian President Volodymyr Zelenskyy. The next day, Sondland said in an interview on Ukrainian state TV that he'd spoken with President Trump "just a few minutes before [the president] placed the call." When asked why the U.S. ambassador to the EU was "spending a great deal of time" in a country that's not part of the EU, Sondland replied:

"Well, President Trump has not only honored me with the job of being the U.S. ambassador to the EU, but he's also given me other special assignments, including Ukraine, as I mentioned previously."

Sondland was asked to testify before House committees shortly after the release of the whistleblower complaint. According to the complaint, Sondland, along with former U.S. special envoy to Ukraine Kurt Volker, "reportedly provided advice to the Ukrainian leadership about how to 'navigate' the demands that the president had made of Mr. Zelenskyy." When acting U.S. Ambassador to Ukraine Bill Taylor expressed his concerns about the July 25 phone call, Sondland said, "The President has been crystal clear no quid pro quo's of any kind."

After being issued a subpoena for failing to show up for his first congressional interview, Sondland testified that he didn't know that the president's decision to withhold nearly $400 million in military aid to Ukraine was tied to the country opening an investigation into Joe Biden and his son. He also said he did not think there had been a "quid pro quo" with Ukraine.

But after testimony from other officials contradicted Sondland's account, he revised his original testimony to say that he did tell a Ukrainian official "resumption of U.S. aid would likely not occur until Ukraine provided the public anti-corruption statement that we had been discussing for many weeks."

Taylor testified last week that a member of his staff had overheard Sondland and President Trump discussing Ukraine over the phone on July 26. According to a  transcript of his testimony released Monday, the staffer said Sondland later told him President Trump only cared about "big stuff" in Ukraine. He said Sondland clarified that by "big stuff," he meant "big stuff that benefits the president, like the 'quote, unquote,' Biden investigation."

Sondland will testify before the House Intelligence Committee on Wednesday.