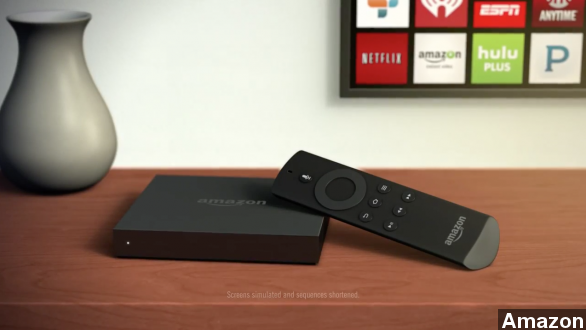 By Adam Falk
April 9, 2014
Amazon's streams nearly tripled over the last year, according to a report from Qwilt. The service is still well behind Netflix.
SHOW TRANSCRIPT

Amazon is now streaming more video than Hulu and Apple.

Amazon cites stats gathered by Qwilt showing the company's streaming traffic increased 94 percent from March 2013 to March 2014. And in some operator networks, it jumped almost 300 percent.

That sharp spike allowed Amazon to climb two spots to No. 3. But wait — there's a catch here.

This growth happened before Amazon announced Fire TV. The Apple TV, Roku and Google Chromecast rival is sure to keep Amazon's number trending upward. (Via CNET)

​Amazon's VP of digital video and music says, "We've invested hundreds of millions of dollars in great TV shows and movies for Prime members, and it's working."

OK, but really, there is a catch. That jump, while large, remains small in context.

In 2013, Amazon accounted for 0.6 percent of streaming traffic. Now, it accounts for 3 percent. Adding Netflix in there, you'll start to see a different picture.

Variety points to a traffic report from Sandvine that found together Netflix and YouTube accounted for more than 50 percent of downstream traffic in North America during peak hours in September.

And The Verge simply adds, "Netflix [retains] its position as one of the largest sources of internet traffic — not just video streams."

But don't expect Amazon to stop.

Aside from Fire TV, the company is heavily promoting its original programming, adding four new shows to the mix this year and next. (Via Amazon Studios / "Alpha House")

Qwilt says Amazon has an "insatiable appetite for new markets. … So, fair warning to Network Operators - if Amazon is saying it is serious about streaming, get ready for the rivers to run fast and deep."