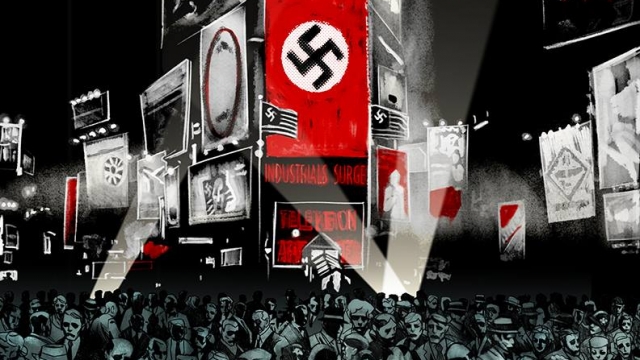 "Calling America. Are you out there? ... Or maybe you're down on your knees praying. Praying for change in a world unraveled."

It was created as a promotion for Amazon's original series "The Man in the High Castle." It imagines a world where the Axis powers won World War II.

"Never give up. This is Resistance Radio, and these are your sounds of freedom."

In between songs, various DJs attempt to inspire listeners to stand up to Nazi Germany and Imperial Japan, both of whom have taken over the U.S.

"Hijacking the airwaves, a secret network of DJs broadcast messages of hope to keep the memory of a former America alive," Resistance Radio's website says.

But some people on Twitter seemed to think Resistance Radio was actually an anti-Trump radio station.

Now, to be fair, the name Resistance Radio is not brand new. Prior to Amazon using it, podcasts covering politics, the environment and even "Star Wars" have used the phrase.

Amazon Studios is no stranger to controversy when it comes to marketing for "The Man in the High Castle."

During the show's first season in 2015, the streaming service decked out a New York City subway car with symbols of Nazi Germany and Imperial Japan.

The ads were later pulled after multiple people complained.

And advertising for the show's second season featured the Statue of Liberty giving a Nazi salute.

The third season of "The Man in the High Castle" is scheduled to premiere on Amazon later this year.