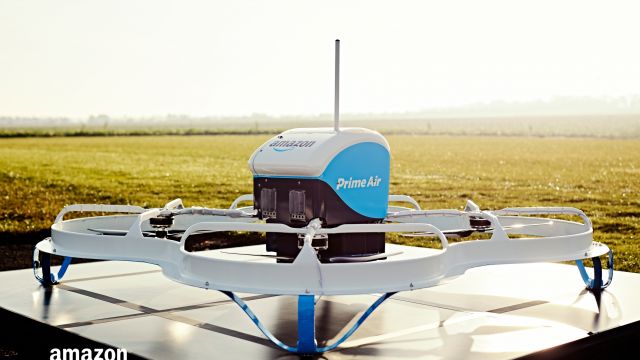 The army-style air drop took 13 minutes from order to delivery. The flight was entirely autonomous — no pilot needed. The only human element was the employee who packed the box.

SEE MORE: Amazon Go: A Store With No Lines And No Registers

These drones do have limitations, starting with their 5-pound maximum on cargo and limited maneuverability.

The beta trials are done in rural areas where there aren't that many power lines, buildings or alleys the drones need to avoid. This is one of the barriers to drone delivery in the U.S. market, since nearly two-thirds of the country's population lives in urban areas.

The delivery is part of beta testing being done in the U.K., where Amazon is allowed to fly drones beyond the controller's line of sight — something that's still illegal in the U.S.

Amazon and several other companies have partnered with NASA and the U.S. Federal Aviation Administration to develop an air traffic control system for drones and other devices flying around at lower altitudes.

Their goal is to send their research to the FAA for review by 2019.