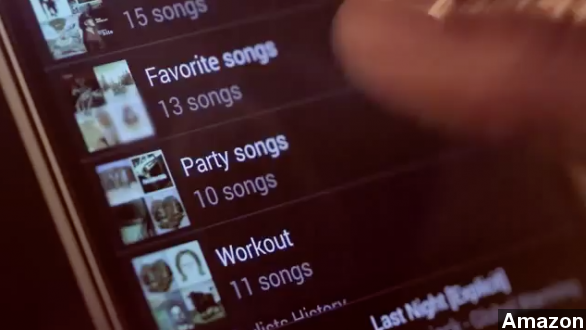 ​Remember when Amazon bumped it's Prime membership fees up $20? (Via Newsy)

Well, your $99 a year is about to stretch even further. (Via Amazon)

“At Amazon, we’ve done the heavy lifting for you, with over a million songs available instantly for free for Prime members. This is Prime Music.” (Via Amazon )

Yep, Amazon announced Thursday it will be joining the rest of the tech titans in the streaming music space.

Prime Music has a library of more than a million songs, which isn’t really that impressive when stacked next to competitors Spotify and Beats Music, both of which boast tens of millions of songs. (Via Amazon)

Amazon’s service puts an emphasis on curated playlists, like “Pop to Make You Feel Better.” (Via Amazon)

But some argue this is just the beginning for Amazon.

Fortune reminds us— Amazon launched its Kindle Library and Prime Instant Video with few options too. But now… (Via Amazon)​

“The Kindle Lending Library has swelled to 500,000 titles, and Prime Instant Video claims well over 40,000 movies and shows. In recent months, Prime Instant Video, in particular, has transformed from an underwhelming to a solid service that is challenging Netflix.”

So maybe there’s hope of catching Spotify? The Verge argues Amazon doesn’t need to, saying… “Prime Music is in a unique position to become your other music app.” (Via Spotify)

CNN points out, this new music service is only one of Prime’s membership perks.

“At $9.99 per month, a Spotify subscription will leave a slightly larger dent in your wallet than Amazon's Prime Music -- and you won't get that fuzzy bathrobe you ordered delivered to your doorstep for free.”

Because you pay to play, the music streams ad-less on your desktop and mobile devices. However, non-Amazon Prime members can give the service a shot for free for 30 days.