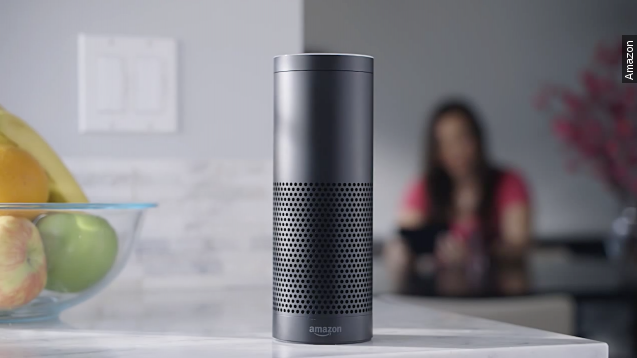 SMS
Amazon Echo, Other Voice Assistants Could Be Making Us Lazy
By Katie Link
By Katie Link
June 23, 2015
Amazon's voice assistant, Echo, is now available to the public, and it's raising concerns that technology is making us lazy.
SHOW TRANSCRIPT

Meet Alexa. She's the newest voice in a long line of automated devices created to make our lives more simple. And as of Tuesday, she's available to everyone in the form of Amazon's Echo.

"Echo is a device designed around your voice. Simply say 'Alexa' and ask a question or say a command. 'Alexa how many tablespoons are in 3/4 cup?'" an Amazon actor says.

Looks like Apple's Siri and Microsoft's Cortana have a new girl on the block to compete with. The black cylinder with the operating system named Alexa can share news alerts, play music, check traffic and weather, store to-do lists, help you shop and even turn off lights and control your home's heating and cooling. Cool, right?

Maybe not. Research shows technology continues to make people more lazy. Or at least gives them more free time to do unproductive activities. According to an American Time Use Survey conducted by the Bureau of Labor Statistics in 2013, Americans spent more time watching TV than doing any other leisure activity.

Some argue that this rise in TV time directly relates to a rise in voice-automated devices. (Video via Netflix)

In a Wall Street Journal article titled "Automation Makes Us Dumb," Nicholas Carr writes: "If we let our own skills fade by relying too much on automation, we are going to render ourselves less capable, less resilient and more subservient to our machines. We will create a world more fit for robots than for us." (Video via TriStar Pictures / 'Terminator 2: Judgement Day')

But one person's potential laziness is another person's gold mine. Amazon is charging about $180 for its new product. And so far, most reviews have been glowing.

In December, shortly after the product was introduced, ZDNet gave the Echo rave reviews. Likewise, Mashable praised the product's wide range of abilities.

This video includes images from Getty Images and music Pierlo / CC BY 3.0.