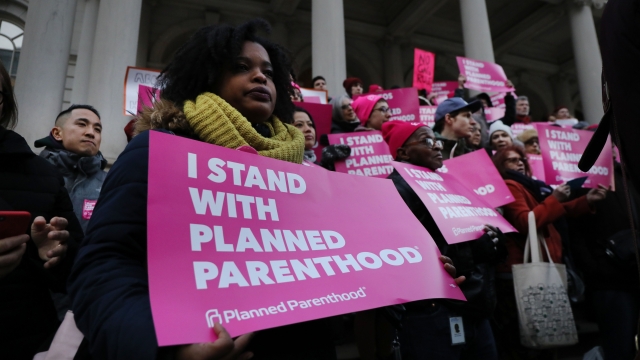 The American Medical Association and Planned Parenthood are suing the Trump administration to block changes to the Title X family planning program.

The AMA filed the lawsuit in a U.S. district court Tuesday, with Planned Parenthood and the Oregon Medical Association joining the suit.

The new rule, which was published in the Federal Register on Monday, would cut federal funding to Planned Parenthood locations that perform or refer patients for abortions. It would also require that the clinics receiving funding be completely separate, physically and financially, from facilities that are linked to abortion services; and it would shift some funding toward faith-based organizations.

The AMA says the rule "would violate patients' rights under the Code of Medical Ethics, would force doctors to violate their obligation to give honest and informed advice, would withhold federal family planning funding from entities that provide critical medical services to vulnerable populations, and would harm millions of patients who rely on Title X for their reproductive health."

The new rule is scheduled to go into effect in under two months, but it will likely be delayed due to the multiple legal actions against it. California and a coalition of 20 states separately announced lawsuits over the rule on Monday. The National Family Planning and Reproductive Health Association and the Center of Reproductive Rights are also planning to take the issue to court.