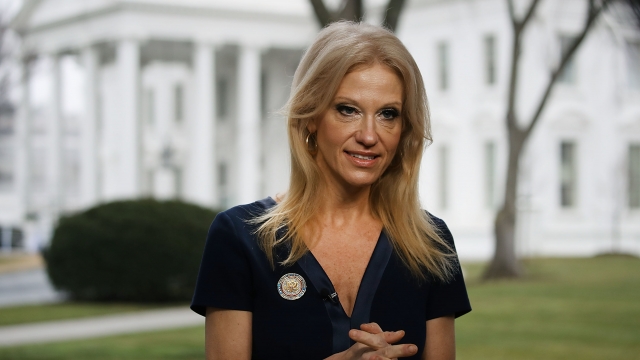 "You're saying it's a falsehood. And they're giving — Sean Spicer our press secretary — gave alternative facts to that," Kellyanne Conway told Chuck Todd on NBC's "Meet the Press" on Sunday.

Todd replied,  "Alternative facts are not facts. They're falsehoods."

It's been two days since Conway, counselor to President Trump, defended inaccurate statements made by the White House regarding the size of the inauguration crowd.

White House press secretary Sean Spicer said in a statement Saturday, "This was the largest audience to ever witness an inauguration, period — both in person and around the globe."

But "alternative facts" are still a hot topic of discussion. Besides becoming the butt of jokes on social media and on TV, the phrase has apparently sparked an interest in George Orwell's book "1984."

As The Guardian pointed out Tuesday, the book has become a bestseller on Amazon. It reached the number 3 spot by Tuesday afternoon.

Orwell didn't use the phrase "alternative facts" in his book. But the phrase reminded those who have read the book of the term "newspeak."

Merriam-Webster's definition of it is "propagandistic language marked by euphemism, circumlocution, and the inversion of customary meanings." The dictionary didn't tweet out that definition to Conway. But it did tweet the definition of the word "fact."

The concept of "alternative facts" even came up in the Senate confirmation hearing for President Trump's pick to lead the Office of Management and Budget.

"Are you comfortable as you proceed as a key budget adviser presenting falsehoods as simply an alternative fact?" Sen. Jeff Merkley asked Mick Mulvaney.

We probably shouldn't expect the phrase "alternative facts" to go away any time soon. If the first White House press briefing Monday was any indication, the Trump administration is standing its ground when it comes to the media.

"The narrative — and the default narrative is always negative, and it's demoralizing," Spicer said during the press briefing Monday.