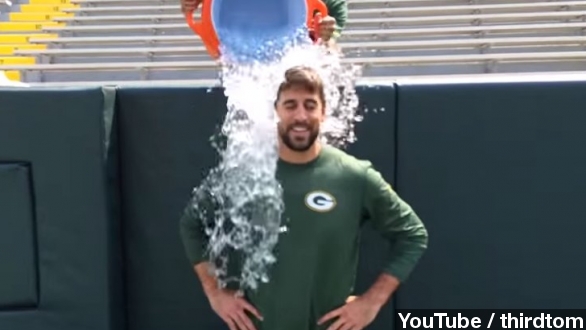 Shaw posted a video of himself doing the challenge on the Tennessee Titans website Tuesday. In that video, Shaw made a surprising revelation — announcing he too is battling ALS.

Shaw, who's 30, last played in the NFL in 2012 as a linebacker with the Titans. The Penn State alum also played for the Carolina Panthers, Jacksonville Jaguars and Chicago Bears throughout his career.

ABC points out Shaw isn't the only former NFL battling the disease. The outlet says former players Steve Gleason, O.J. Brigance and Kevin Turner are among others in the same situation.

As The ALS Association describes it, "Amyotrophic lateral sclerosis (ALS) is a progressive neurodegenerative disease that affects nerve cells in the brain and the spinal cord." Those with the disease slowly lose speech ability and use of their muscles. Ultimately, they become paralyzed.

But, the links between ALS and athletes is deeply rooted.

ALS is also known as "Lou Gehrig's Disease," named after one of Major League Baseball's greatest players who was diagnosed with it in 1939.

ALS THERAPY DEVELOPMENT INSTITUTE, LOU GEHRIG: "I might've been given a bad break, but I've got an awful lot to live for. Thank you."

And the whole "Ice Bucket Challenge" social media sensation started this year thanks to a pair of athletes. (Video via The Boston Globe)

It started with many people on social media donating to their favorite charity or face the icy water. But, The Golf Channel reports it's golfer Chris Kennedy who first started connecting it to ALS with this video. Kennedy's cousin suffers from the disease.

That's when the trend first got goin' and ESPN reports former Boston College player Pete Frates really brought it to mainstream social media. Frates, 29, was diagnosed with the disease two years ago. (Video via A Life Story Foundation)

"Last month, one of Pete's friends introduced him to the Ice Bucket Challenge. ... Pete couldn't do it himself, but he could ask others to do it.

And the rest is social media history. Pete eventually did do the challenge at his home team's Boston Red Sox's Fenway Park.