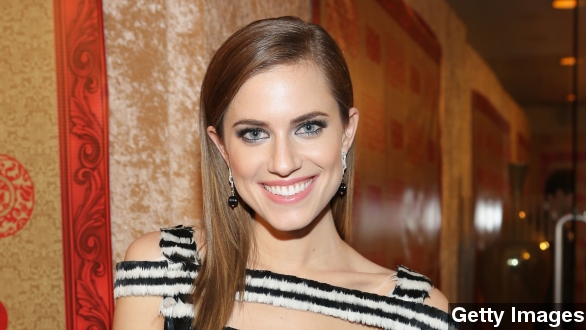 By Lauren Zima
July 30, 2014
The star of HBO's "Girls" is moving into a much more family-friendly role as "Peter Pan" for NBC's live version of the musical.
SHOW TRANSCRIPT

Allison Williams is set to star in NBC’s upcoming live version of ‘Peter Pan’, and all we can say is... (Via Getty Images)

A star on one of the most-talked-about shows on TV chooses to revive an old-school musical? And a major network that’s trying to reach families all across America casts a women who’s relatively unknown to most of middle America except for her role on a series that includes a whole lotta sex? (Via HBO / 'Girls', NBC)

Williams is apparently still so unknown, despite being on HBO for more than two years, that ABC deemed it necessary to do a "five things to know"-about-her article in light of the “Peter Pan” news.

So, what’s the thinking here? Well for Williams, this would mean a starring vehicle, and even with the success of “Girls,” that’s something she hasn’t had yet.

And the fact that “Peter Pan” will be family-friendly might not be so bad. NBC’s live “The Sound of Music” made huge ratings in December thanks to that vibe – ratings not seen in years for the network. (Via The Hollywood Reporter)

So, she’ll be seen by millions. As for NBC, “The Sound of Music: Live!” was a hit with audiences -- with critics, not so much.

Carrie Underwood carried the show, except that she didn’t, because she’d never acted before. Her performance was panned. (Via TIME)

The second time around the network seems to be bringing acting talent to the table — Christopher Walken will play Captain Hook. (Via Getty Images)

And Williams might be the combo of acting and singing chops the network didn’t have with Underwood. She’s got TV experience, and she’s a trained singer.

In fact, a video of her singing that she made with fellow students at NYU helped land her the part on “Girls.” It caught producer Judd Apatow’s eye. (Via YouTube / Live Music Videos)

She has also sung on “Girls.” In a joint statement, the producers of “Peter Pan” call Williams a “major find,” and Williams has a lighthearted outlook we like.

She says: “What could go wrong in a live televised production with simultaneous flying, sword fighting and singing?” (Via Entertainment Weekly)

What indeed. We’ll just have to see how this lost girl does as a, well, lost boy.