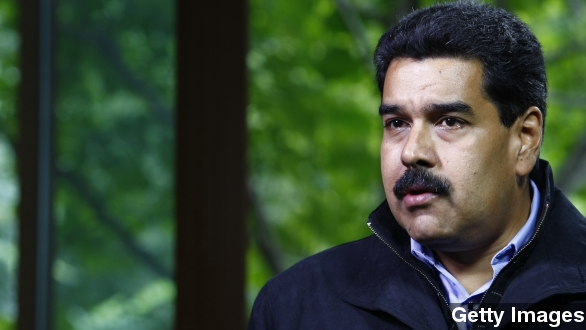 Eleven soldiers in Venezuela have been arrested for allegedly plotting a coup to overthrow the government of President Nicolas Maduro.

Opposition groups have been protesting Maduro's policies and Venezuela's lagging economy throughout the last year. (Video via Euronews)

Polling shows a majority of the country wants him out of power. Despite this, Maduro says he's convinced the planned attack came from outside Venezuela's borders.

According to Maduro, the U.S. coordinated the planned attack. RT reports Maduro said Washington provided financial help and a visa to a pilot arrested for his alleged involvement in the failed coup.

Maduro's comments are hardly surprising. The relationship between Venezuela and the U.S. has deteriorated over the last 25 or so years.

The two countries had a collaborative relationship before the so-called "El Caracazo" riot in 1989.

The protests gave way to the rise of Hugo Chavez, whose socialist policies and anti-American sentiments seriously strained U.S.-Venezuelan relations. (Video via The Guardian)

"The President of the United States, the gentleman to whom I refer as the devil, came here, talking as if he owned the world," Chavez said of President George W. Bush during a 2006 speech.

And Maduro pretty much started knocking the U.S. as soon as it became clear he would assume the presidency. When Chavez died from cancer in 2013, Maduro implied that Washington may have deliberately infected Chavez with the disease.

Maduro's recent comments marked the second time this month he'd accused the U.S. of orchestrating a coup. About two weeks ago, Maduro said Vice President Joe Biden had discussed overthrowing his government with other world leaders. The U.S. has dismissed both accusations. (Video via NTN24)

This latest coup allegation also has skeptics saying Maduro is trying to distract his people. It coincided with several unpopular economic reform announcements, and low oil prices in recent months have hurt an already-devastated Venezuelan economy.