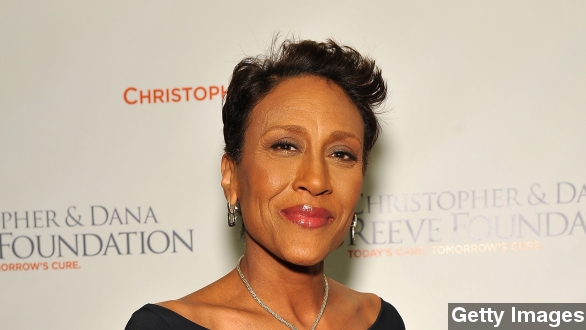 By Briana Koeneman
July 31, 2014
A man was arrested Monday for allegedly stalking 'Good Morning America' anchor Robin Roberts and threatening to punch her in the face.
SHOW TRANSCRIPT

According to several reports out Wednesday, a man has been arrested for stalking Roberts at ABC's Time Square Studios. And he even threatened to harm her.

Court records accuse 43-year-old Troy Warren of showing up at the studio eight times between June 10 and June 24 and demanding to see Roberts.

Page Six reports Warren even told "Good Morning America's" security director, "When I see her, I'm going to punch her in the face."

According to court documents posted online by the New York City Department of Correction, Roberts' alleged stalker was arrested Monday on charges of 4th degree stalking and is being held on $3,000 bail. Wednesday, he was charged.

This is the second unsettling incident at ABC in the last few weeks.

And other celebrities have had their fair share of too-close-for-comfort stalker experiences too.

TMZ reported earlier this month Sandra Bullock came face-to-face with an intruder outside her own bedroom door after he broke into her Los Angeles-area home.

Back in April, Gwyneth Paltrow had to get a restraining order against a man who managed to get into two of her homes in both London and Los Angeles. (Via Getty Images)

And in August 2013, a man who claimed to be Jennifer Lopez's husband apparently settled into the guest house of her Hamptons home for six days without being noticed. (Via Getty Images)