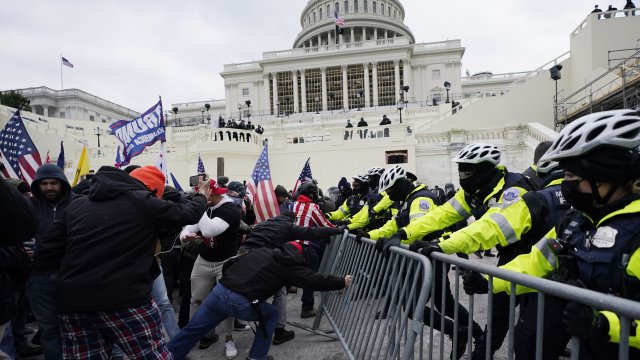 SMS
Alleged Rioters Say Jan. 6 Wasn't Their Fault, Blame 'Mob Mentality'
By Alex Arger
By Alex Arger
May 23, 2021
At lease a dozen insurrection defendants say they didn't mean to get caught up in Jan. 6 riot, with some blaming then-President Trump.
SHOW TRANSCRIPT

Some of those charged in the January 6 riots — accused of smashing through police barriers and storming the U.S. Capitol — are now saying their part in the surge wasn't their fault.

At least a dozen Capitol riot defendants identified by the Associated Press say their presence among the mob was an accident... that they were "caught up" and pushed inside by force, not as supporters of the fight.

The defense is partly a tactic for some to restore reputations after being part of the event, while others are trying to defend themselves at trial... or for sentencing.

More than 400 people have been charged in connection to the riot — the largest prosecution in the Justice Department's history. And federal prosecutors are expecting to charge at least 100 more.

One man, who was accused of helping break a glass door to the House chamber, said he never planned to storm the building. Another said he was overwhelmed by a moment sparked by then-President Donald Trump.

In filings, his lawyer said, "He would never have anticipated finding himself in the situation, but for the president and the rally and the way everything went down. We’ve heard ‘mob mentality’ — and he describes it to a T."

That's what many are saying — that participants acted in ways they wouldn't have naturally, but the crowd of like-minded people changed their ways. But this defense of outside influences and a blame-the-crowd point of view is typically rejected in court.

And while plea negotiations are underway in some cases, the amount of evidence — including that from other rioters themselves — is making it hard for many to cut deals with prosecutors for lesser punishment.