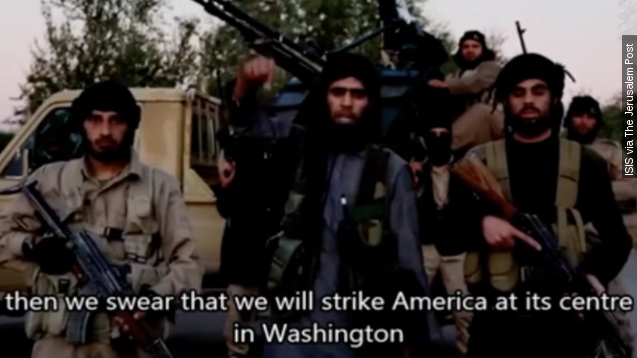 SMS
Alleged ISIS Video Threatens Washington, DC, With Paris-Like Attacks
By Matt Moreno
By Matt Moreno
November 16, 2015
A group claiming to be affiliated with ISIS said in a video that it would carry out attacks in Washington, D.C., like those in Paris on Friday.
SHOW TRANSCRIPT

"We say to the states that take part in the crusader campaign that, by God, you will have a day. God willing, like France's and by God, as we struck France in the center of its abode in Paris, then we swear that we will strike America at its center in Washington," the man said.

ISIS is purportedly threatening Washington, D.C., with attacks similar to those in Paris on Friday.

In a newly released video Monday, a man identified as Al Ghareeb the Algerian threatened the U.S. Capitol.

The Washington Post reports the six-minute long video is being attributed to Wilayat Kirkuk, a branch of ISIS based in Iraq's Salahuddin province. The authenticity of the video hasn't been verified. (Video via CCTV)

The man threatening Washington in the video also said other European countries can expect the same.

Friday's attacks in Paris, carried out by a group of suicide bombers and gunmen, left at least 129 people dead and hundreds more injured. ISIS claimed responsibility for the attacks.