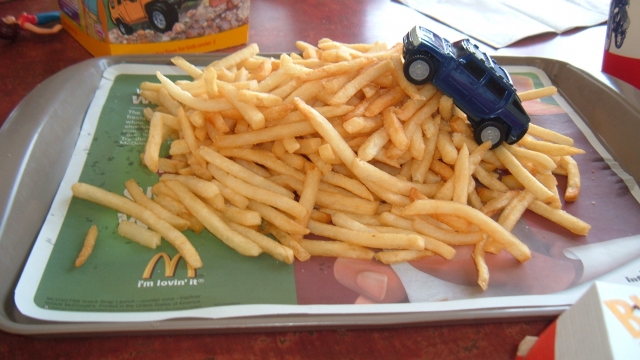 SMS
All-You-Can-Eat French Fries Might Be Key To A Less Boring McDonald's
By Carter Woodiel
By Carter Woodiel
April 16, 2016
McDonald's has broken ground on a new restaurant where there's apparently no limit to the number of fries that come with that Big Mac.
SHOW TRANSCRIPT

If you're one of those people who fights over the last french fry at the bottom of the bag, here's some good news. A new McDonald's location will soon be offering all the french fries you can eat.

The brand-new Mickey D's is coming to St. Joseph, Missouri, and the place is already being billed as "The McDonald's of the future." And bottomless fries is only one of the unusual things the restaurant's developers say the place will have.

The location will have 6,500 square feet of space, with amenities— including table service, couches and armchairs — and an expansive play place for kids.

It'll also come equipped with self-serve ordering kiosks, which McDonald's has been experimenting with for a while now to speed up orders and make them more customizable.

Some have raised concerns the kiosks might be a way for McDonald's to cut down on labor costs in the future. But the company building the futuristic McDonald's in Missouri says the kiosks won't affect how the joint is staffed.

The new restaurant is the latest step in a subtle reinvention McDonald's has been rolling out since new CEO Steve Easterbrook was introduced last year.

One of the company's new ideas was all-day breakfast, which saw a sizable boost in sales after it was introduced — though franchises initially complained the more complicated menu led to slower service.

And opening up an experimental restaurant isn't groundbreaking. Last September, Taco Bell opened up its first location that sells booze, with plans to open eight more over the next year.

As for the new McDonald's, customers will still have to wait a couple months for the future to arrive. The new Mickey D's is set to open in July.

This video includes clips from McDonald's and CTV and images from Getty Images.