All The Ways Technology Made Our Lives Better In 2014 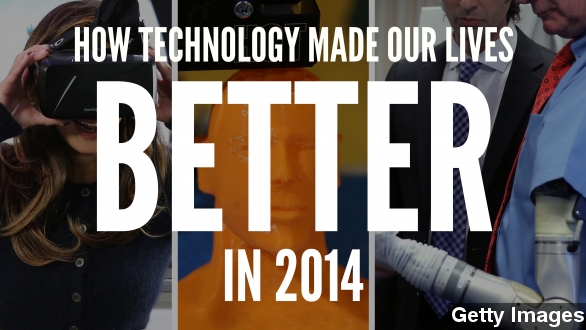 SMS
All The Ways Technology Made Our Lives Better In 2014
By Matt Picht
By Matt Picht
December 30, 2014
Despite some scary headlines, technology made major strides forward in 2014. Here's how tech helped us out this year.
SHOW TRANSCRIPT

With all the gloomy tech news that’s been in the headlines recently, it’s easy to lose track of all the good things that technology brought us in 2014. From futuristic gadgets to life-enhancing devices, 2014 made quite a few improvements to our increasingly digital lives.

Let’s start with devices — 2014 gave us plenty of toys to play with. Our phone screens got bigger and better than ever this year, thanks to Apple’s iPhone 6, Google’s Nexus 6 and Samsung’s Galaxy Note 4.

Apple’s new phones have ushered in another milestone as well: unless you’re one of those Androiders, 2014 was probably the year you learned what an NFC chip is.

Apple Pay has spurred widespread adoption of NFC payments, taking us one step closer to the era of credit card phones.

And while Apple’s currently restricting the feature to cash-based uses, their support could see a whole range of new and useful applications for NFCs.

Though, there’s still some kinks NFC manufacturers have to work out.

Well, that looks like a free ride on the Moscow subway. Thanks, Nintendo!

Also, a few people got NFC chips implanted into their hands this year. So that's cool. I for one welcome our cyborg overlords.

But enough about cyborg hands. Let’s talk about wrists! Boy, what a great year for wrists, huh?

Whether you prefer a snazzy smartwatch or a sleek fitness band, there were plenty of new options to keep your wrists loaded down with gadgets this year.

Many of these wearables focus on fitness and wellness, boasting an array of features like activity trackers and sleep monitors to help us live better than ever. It’s never been easier to stick with your New Year’s resolution — which means, no more excuses.

And of course, there were the apps.

Despite hitting a few potholes, Uber is still on the rise, and plenty of sharing services have cropped up in its wake. There’s an Uber for your chores, your laundry, your private jet … pretty much anything. The “sharing economy” still has yet to beat out the “economy economy,” but there were plenty of new ways to make your life a little easier — or make yourself a little cash on the side.

Speaking of money, we’re also getting a taste of what Silicon Valley could do for us on Wall Street. Apps like Robinhood, Investr, Acorns and Wherewithal gave us a new and easy way to get into the stock market.

The year also saw plenty of other futuristic technologies take massive steps forward, even if they weren't quite ready for widespread commercial adoption.

Samsung put out a prototype headset that turns your phone into a virtual reality device. Google did the same thing, but made of cardboard. And Facebook’s Oculus Rift continues to make leaps and bounds toward a consumer release.

We don’t quite have delivery drones yet, but Google and Amazon both displayed their prototypes this year, promising us yet another time-saving convenience. And we do have some gorgeous drone photography to tide us over in the meantime.

3D printers, another futuristic technology, are becoming better and more prevalent, opening up a wide range of uses. NASA just printed a wrench in space, a phrase I never thought I’d get to utter five years ago.

But in terms of pure goodness, it’s hard to argue with the advancements we’ve made in prosthetic technology. 3D printing has made prostheses more affordable than ever.

And the hi-tech end is getting better as well. We’re getting more capable, more natural limbs that can be wired straight into the nervous system. Just recently, scientists at Johns Hopkins gave a double amputee the first-ever pair of mentally controlled prosthetics.

So on balance, maybe 2014 wasn’t as bad as it’s been made out to be. It definitely brought us a lot of great advancements in tech, and a lot of promise for the years ahead.

This video includes images from Getty Images and Theoxfordcommas / CC BY SA 4.0.