All The Times Brad, Angie And Jen Fought For Headlines 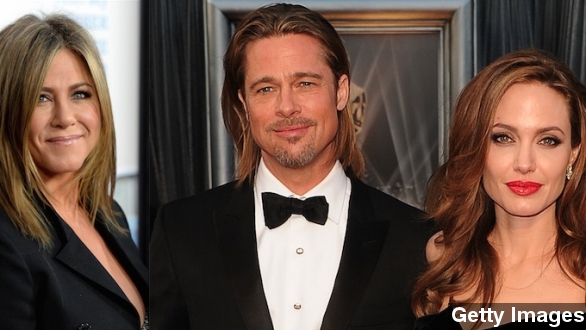 Pitt and Jolie announced they were married the same weekend Aniston's new movie is coming out. A look back at their famous feuds.

A spokesperson for Brad Pitt and Angelina Jolie announced Thursday morning they had married in a secret wedding in France. After two years of being engaged. No one saw it coming. (Video via 20th Century Fox / "Mr. & Mrs. Smith")

And suddenly, Jennifer Aniston's "Friends" stunt — just, you know, reuniting three of the biggest sitcom stars ever — was nothing.

Now, we're not saying Brad and Angie did this on purpose, but it's an all-too-familiar narrative: lonely Jen vs. the happy couple.

Because, you know, a picture of her at her movie premiere Wednesday night is indicative of her feelings after hearing her ex's marriage news Thursday morning.

The trio can't control all the comparisons in the media — but this time, Brad and Ang made the choice to announce their marriage news heading into the weekend Aniston's new movie hits theaters. (Video via Roadside Attractions / "Life of Crime")

And there have been other key, seemingly calculating moves over the years.

Flash back to 2005: the aftermath of the split. In July Brad and Angelina do a massive photo spread for W magazine, depicted as a sexy '60s couple with several kids. Foreshadowing, anyone?

Come September, Aniston's on the cover of Vanity Fair. In response to the W cover, she declares Pitt is missing a "sensitivity chip." She admits to being lonely but says she's doing well.

Now get ready to have your minds blown. In Vogue's January 2007 issue, Angelina gives an interview about how she and Brad got close on the set of "Mr. & Mrs. Smith."

Then in July 2008, Jolie tells Vanity Fair, the magazine that Jen spoke out to about the split, that she and Brad feel married.

Aniston might have had enough. For its December 2008 cover, she tells all to Vogue, the magazine Jolie spoke to about "Mr. & Mrs. Smith." Aniston says the 2007 interview Jolie did was "very uncool."

When that came out, E! even did a side-by-side, dubbing it the "Vogue battle." Note both women even appear in off-shoulder red dresses. E! wrote, "We really do hope that one day in the near future, Angelina Jolie and Jennifer Aniston will be able to coexist ... without the need to passive-aggressively taunt each other with every celebrity profile."

There are a few quieter years here, although it's hard to forget the 2009 Oscars, when Aniston was on stage and the camera operators kept panning to Jolie. Awkward, but out of their control.

Then, 2012, the promised year of the apocalypse, and also the year both Brad and ex Jen got engaged to their respective significant others. Brad and Angie were first in April; Aniston followed in August.

Media prediction? That this would be the era of the wedding wars.

Will we see a similar move from Aniston and fiance Justin Theroux anytime soon? They've gone down the same discreet, ambiguous path as Brad and Angie.

We're hoping for a wedding announcement the weekend Brad and Angelina's on-screen reunion, "By the Sea," hits theaters. Our heads would explode.

Lauren Zima is a newswoman and comedienne of the first(ish) order. She loves celebrity news, TV and previews at the movies. She relishes goofy dancing and hopes to one day retire to a front porch in the South and sip sweet tea. Get on board with her if you like entertainment news delivered in weird voices. @laurenzima