All The People Ted Cruz Looks Like (But Probably Isn't) 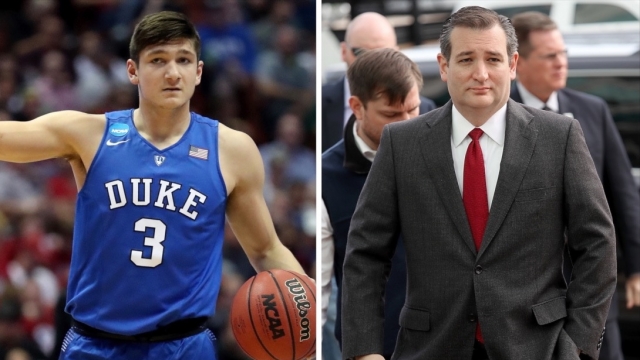 SMS
All The People Ted Cruz Looks Like (But Probably Isn't)
By Carter Woodiel
By Carter Woodiel
March 27, 2016
Ted Cruz has denied he's Duke star Grayson Allen, but he still has a long list of doppelgangers he has yet to formally address.
SHOW TRANSCRIPT

Ted Cruz has cleared up a pressing issue clouding his campaign as of late: He is not Duke basketball player Grayson Allen, despite the remarkable resemblance.

"I don't have nearly the hops to be him," Cruz said, later adding: "I'm proud of my 6-inch vertical. The only way I see the rim is standing on a ladder."

For his part, Allen denies the resemblance as well.

"I don't see it, and I asked my parents, and they don't see it either," Allen told a reporter for CBS North Carolina. "I think the only person I look like is my dad; we're identical."

Now, it could be just us, but it sure feels like Cruz is under a mountain of similar doppelganger allegations.

There's of course the rumor that Cruz is the famed Zodiac killer, a claim that's been around since at least 2013. But his alleged doppelgangers go so much deeper than that.

Cruz's appearance has also been linked to Kevin from the American version of "The Office."

The accusations even cross gender lines. Gawker claimed Cruz might actually be the late Princess Diana.

Cruz has also been linked to Wario, a claim which, to Cruz's credit, he's at least addressed.

He said on Twitter his daughters Catherine and Caroline loved it — but didn't deny he's actually Wario.

This video includes clips from CBS North Carolina, PBS, ABC and Nintendo and images from Topher McCulloch / CC BY 2.0 and Getty Images.