Religious HBCUs Will Now Have Equal Access To Federal Support 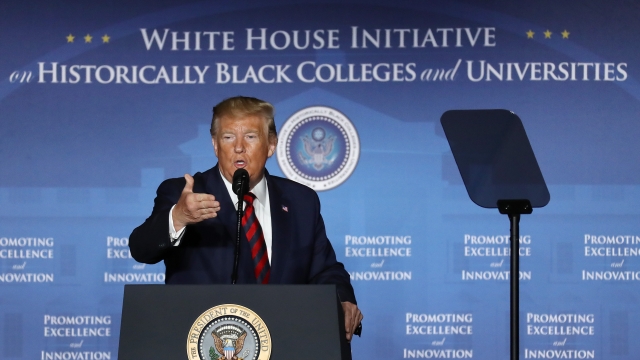 “From now on, faith-based HBCUs will enjoy equal access to federal support."

On Tuesday, President Donald Trump announced that moving forward, Historically black colleges and universities with religious affiliations will no longer be restricted from accessing federal funding for capital improvement projects.

The president spoke at the 2019 National HBCU Week Conference meeting in Washington D.C. He cited a federal law that has restricted more than 40 faith-based HBCUs and seminaries from fully accessing federal loan guarantees for construction projects.

“This meant that your faith-based institutions, which have made such extraordinary contributions to America, were unfairly punished for their religious beliefs.”

President Trump continued by noting a recently published opinion by the Justice Department. The opinion says the federal law that was in place "unconstitutionally discriminates on the basis of an institution’s religious character." The Education Department was limiting the funding for any HBCU in which "a substantial portion of its functions is subsumed in a religious mission."

The president also spoke about assistance he has provided for HBCUs during his time in office, including lifting a ban on Pell Grants for summer classes at HBCUs, which was requested by the Thurgood Marshall College Fund.

Thurgood Marshall College Fund is the nation’s largest organization exclusively representing the Black College Community. It shares statistics on the nation's more than 100 HBCUs. It says: "More than 75% of students at HBCUs rely on Pell Grants and nearly 13% rely on PLUS Loans to meet their college expenses."

In a response to President Trump's announcement on Tuesday, TMCF said it "extends its appreciation to President Trump for acknowledging working with TMCF to restore much needed year-round Pell...We also appreciate President Trump’s renewed commitment to increasing support for Historically Black Colleges and Universities."

The president relocated the initiative for faith-based HBCUs from the Department of Education to the White House. He said his administration is "deeply devoted to advancing this amazing legacy of success, commitment, and contribution to our nation."