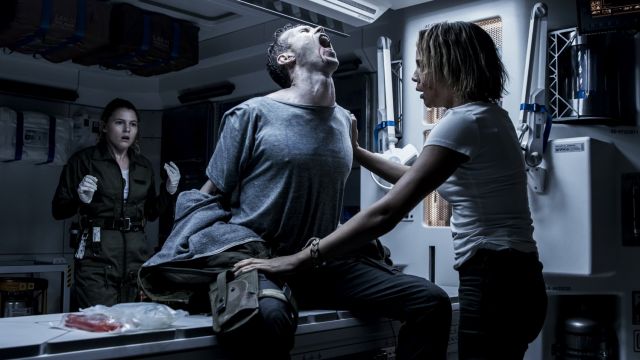 SMS
'Alien: Covenant' Debuts Below Expectations But Takes Top Spot Anyway
By Jamal Andress
By Jamal Andress
May 21, 2017
Director Ridley Scott only recently returned to the franchise, but now it seems like he's here to stay.
SHOW TRANSCRIPT

With a franchise that's been around as long as "Alien," there's a lot of backstory to work through. But the long and short of it is still aliens killing humans in very large numbers.

Barely securing the No. 1 spot this week is the eighth installment in the "Alien" franchise. "Alien: Covenant" brought in an estimated $36 million in its debut weekend.

That's about $15 million behind the "Prometheus" debut from 2012. Fortunately, though, this was a cheaper movie to make, and frankly, it's just a much better film.

As IGN's Daniel Krupa put it: "Director Ridley Scott must've heard the screams of frustration as 'Alien' fans left theaters after watching 'Prometheus.' ... While 'Alien: Covenant' continues to pose new questions about the origins of the classic monster, unlike 'Prometheus,' it provides satisfying answers."

After creating the iconic original "Alien" in 1979, Ridley Scott took a solid 30-year break from the franchise. But now that he's back in the director's chair, he seems to want to hold on to his Xenomorph a little tighter this time.

In a recent interview, he said: "'Star Wars' is still running. I mean, the 'Alien' franchise should be [makes blow-up motion] into 'War of the Worlds' now. That's where I'm going."

Well, if "Star Wars" can recover from the prequels, surely we can all forget "Alien vs. Predator."

Falling to the No. 2 spot this week is "Guardians of the Galaxy Vol. 2," bringing in an estimated $35 million and continuing to clean up overseas with a $732 million box office total.

And at No. 3, Rue is all grown up now, and she's dating boys! Taking the No. 3 spot is "Everything, Everything," bringing in an estimated $12 million and beating box office analysts' expectations.

This teen love story has everything your angsty, rebellious 16-year-old will like — a blond-haired boy, running away from home and, most importantly, bad decisions.

As for next week, Jack Sparrow is back because Johnny Depp really needs a win.