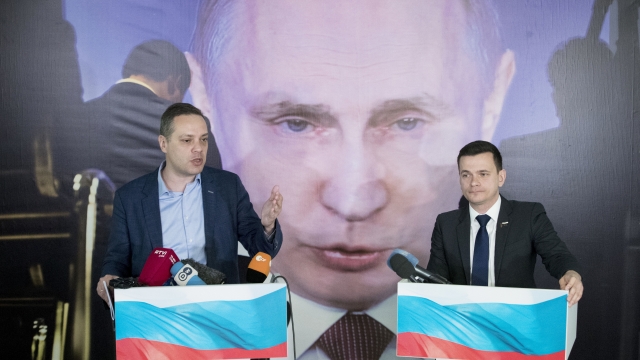 These days, Alexei Navalny, imprisoned and on a hunger strike, isn’t the only Russian opposition politician struggling under President Vladimir Putin.

"I narrowly escaped arrest myself because a lot of police were actually waiting for me at my doorstep," says Milov. "Same as with the others. I was simply warned because I have a lot of supporters who live in the same building."

Another blow: Last week, the Russian government started trying to dismantle Navalny’s network, seeking to designate three groups as “extremists” -- that includes the Anti-Corruption Foundation, which reported on Putin’s billion-dollar personal palace. That could lead to criminal cases, penalties, and frozen finances. According to the organization, the case has been classified as a state secret.

Moscow’s repression isn’t new to Milov. He used to work with another prominent Putin foe who was assassinated near the Kremlin in 2015. But Milov doesn’t feel safe even outside Russia.

"You cannot feel completely safe when we saw many examples that Putin's thugs can actually reach people across the globe," he says. "But we're not giving up the fight, regardless."

Now in Lithuania, he plans to provide officials with evidence of how oligarchs in Putin’s circle have contributed to corruption and a human rights crackdown.

"This is really reminiscent of Stalin period with real mass repressions, with reports, like, over 12,000 people have been detained at mass rallies just within a couple of weeks," Milov says. "And this opposition movement that has emerged in Russia in the past few years is unprecedented. This will not stop us from doing what we do."