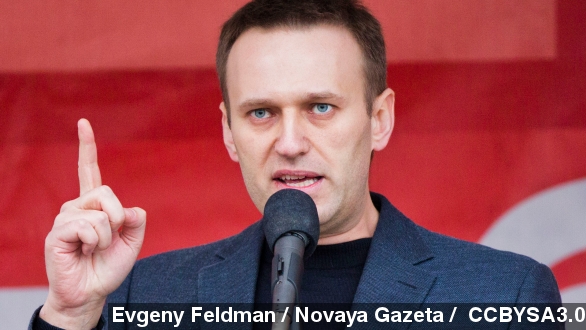 For more than a decade, Vladimir Putin has run Russia and has used the courts and the press to stomp out political opponents.

Today, Navalny is the Kremlin's favorite target. Alexei Navalny is Russia's best known opposition leader and a big critic of Putin and his United Russia Party, which he famously called a party of "crooks and thieves."

When Navalny ran for mayor of Moscow in 2013, he gained more votes than expected and finished second to Putin's handpicked candidate, which didn't make the Kremlin very happy. (Video via Euronews)

Tuesday saw mass protests and arrests in Moscow — all over the latest battle between Navalny and Russia's government.

The previous day, Alexei's brother, Oleg Navalny, was sentenced to a three-and-a-half-year prison sentence. Alexei says it's an attempt to punish him and akin to taking hostages.

"I am ashamed of what you are doing. What are you putting him in jail for? What a disgusting act. All of this is being done in order to punish me even more," Alexei Navalny said in a Deutsche Welle broadcast.

So, Tuesday, Alexei asked supporters to take to the streets outside the Kremlin to protest. And thousands of people did. About 140 people were arrested, including Alexei, who was placed back under house arrest. (Video via Newcaster)

Prosecutors say the sentence is actually about the brothers cheating a timber firm out of millions of rubles. But there's confusion over whether the company ever suffered losses at all, and the Navalnys deny any wrongdoing.

This video includes images from Getty Images and music from Musopen.org.