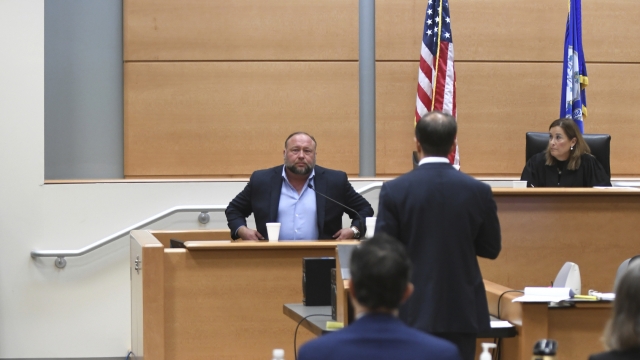 SMS
Alex Jones Takes The Stand In Connecticut Defamation Trial
By Jamal Andress
By Jamal Andress
September 22, 2022
This is Jones' second defamation trial in as many months for spreading false defamatory conspiracy theories about the 2012 Sandy Hook shooting.

It was a testimony of fits and starts when Alex Jones took the stand Thursday in Waterbury, Connecticut.

Attorneys for both sides as well as Alex Jones were admonished by the judge. The judge dismissed the jury several times during testimony so she could handle disputes between opposing sides.

Plaintiff attorney Christopher Mattei: "I asked you whether you believe the FBI is a plaintiff in this case?"

Alex Jones: "Yes, I believe this is a deep state situation."

While on the stand, the attorney representing those connected to the Sandy Hook Elementary tragedy pressed Jones on everything from his company’s finances to derogatory comments he’s made about the trial on his show just this week.

"I'm talking to the people who went to that puppet courthouse and put Infowars stickers everywhere," Jones said. "We commend you."

JONES: "It’s peaceful protest when they burn down two million dollars, that’s good, but when conservatives put up stickers then we’re bad."

More than a dozen family members of various Sandy Hook victims showed up to observe his testimony in Waterbury Superior Court Thursday.

While this is Jones' first appearance in the Connecticut courtroom, he’s given multiple statements outside of court — calling the proceedings a sham.

Back in November of 2021, Judge Barbara Bellis, who is presiding over this case, entered a default judgment against Jones for "willful noncompliance" during the discovery phase of the trial.

"This callous disregard of their obligations to fully and fairly comply with discovery and court orders on its own merits a default against the Jones defendants," Bellis said.

This is Jones' second defamation trial in as many months for spreading false defamatory conspiracy theories about the 2012 Sandy Hook shooting that killed more than two dozen people.

Over the last two weeks, jurors have heard powerful testimony from Connecticut parents who lost children during the shooting and endured harassment from Jones’ followers.

In August, a Texas jury awarded nearly $50 million to the family of Jesse Lewis, a 6-year-old who was killed during the Sandy Hook shooting, in a separate defamation case.