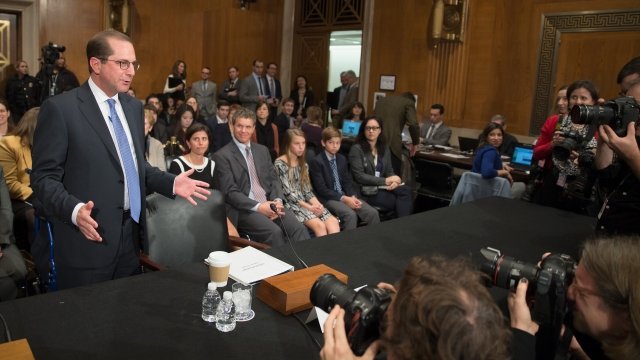 The president's nominee for secretary of health and human services testified before his first Senate confirmation hearing Wednesday.

Azar spoke in front of the Senate Committee on Health, Education, Labor and Pensions. Democratic committee members were largely concerned with rising drug prices, the future of the Affordable Care Act and Azar's past as the president of a major biopharmaceutical company.

During the hearing, Sen. Elizabeth Warren said: "About a decade ago, you worked in government, helping regulate the nation's most profitable drug companies. And when you left, you went straight through the revolving door and became an executive at Eli Lilly and Company."

Perhaps, unsurprisingly, Republicans weren't as concerned about Azar's past in the private sector.

But they did ask about the U.S. drug market and focused on issues related to their home states.

Azar still has to testify before the Senate Finance Committee, which will vote on his nomination before it goes to the full Senate.

As of Wednesday, that committee was still vetting Azar and had yet to set a date for its confirmation hearing with him.