A Cold Snap In Alaska Could Spill Over To 48 States 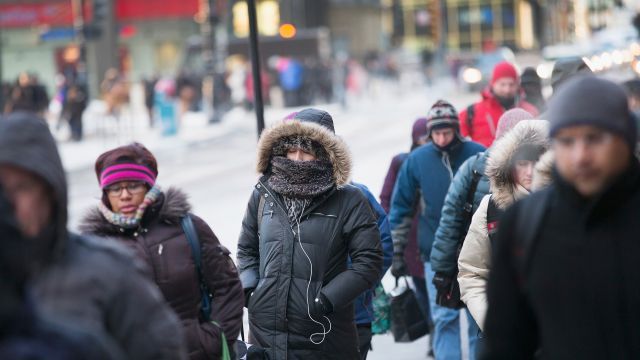 SMS
A Cold Snap In Alaska Could Spill Over To 48 States
By Matt Picht
By Matt Picht
December 1, 2016
A buildup of cold air over Alaska threatens to spill over into the lower 48 states.
SHOW TRANSCRIPT

It's even colder than usual in Alaska right now. And the continental 48 states are about to get a taste of that.

A buildup of cold air over Alaska has been causing temperatures to plummet far below average.

Climatologist Brian Brettschneider explained to Alaska Public Media that the cold air has been building up over the ocean due to a lack of warming sunshine. Brettschneider said, "Right now we're in a pattern where the flow is bringing some of the cold air that's been slowly building up over the last few weeks, it's dragging that into Alaska and so we’re all experiencing those below normal temperatures."

Despite the cold snap, Alaska is still on track to experience one of its warmest years on record in 2016.

Now that cold air is set to migrate south. Meteorologists estimate it will reach the continental U.S. by next week.

That's probably going to cause temperatures to drop. The National Weather Service estimates almost every state west of Ohio stands a greater than 33 percent chance of seeing their temperatures dip.

Midwestern states in particular will feel the brunt of this cold snap. The Washington Post notes temperatures in Billings, Montana, Rapid City, South Dakota, and Denver, Colorado, are all forecast to drop by more than 20 degrees Fahrenheit next week. West Coast states like California and Washington are likely to see their temperatures dip by single digits.

The Cooperative Institute for Precipitation Systems says the cold air mass should thin out as it rolls east across the 48 states.