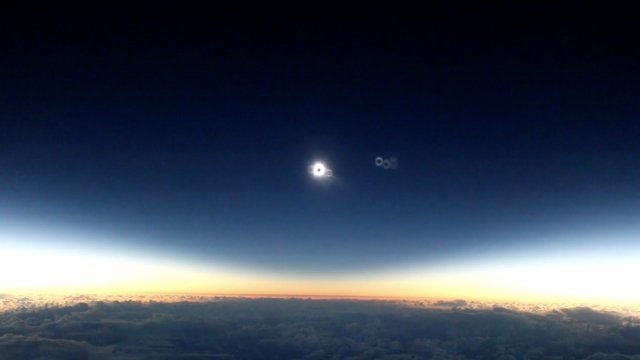 SMS
One Airline Will Let A Lucky Few Watch The Solar Eclipse From The Sky
By Ryan Biek
By Ryan Biek
June 27, 2017
Alaska Airlines says the lucky few winners of its contest will get a special view of the Aug. 21 total solar eclipse.
SHOW TRANSCRIPT

You definitely wouldn't sleep on this flight.

Alaska Airlines said Monday it will take one group of lucky passengers on a flight to "chase 'The Great American Eclipse.'"

All of the continental U.S. will see the moon block at least part of the sun, but millions along a path from Oregon to South Carolina will see a total solar eclipse.

Those on the special Alaska Airlines flight get a guaranteed, unobstructed view of the cosmic event.

The catch? The passenger list is invite-only, except for two seats. The airline will launch a contest July 21, and the winner can bring a guest.

Alaska Airlines didn't immediately say how the winner would be chosen, but considering the continental U.S. won't catch another total solar eclipse until 2024, you might want to give it a shot.