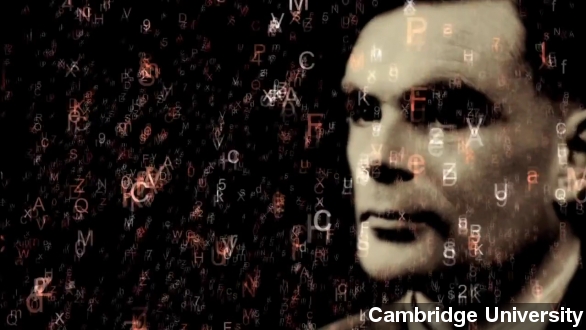 The man who broke the Nazi Enigma code during World War II was once chemically castrated, prosecuted for being gay. (Video via The Weinstein Company / "The Imitation Game")

Inspired by the movie "The Imitation Game" about Alan Turing's life and work, there are new petitions to pardon the men convicted under those laws.

Turing's family just delivered this one on Change.org to British Prime Minister David Cameron. It has more than half a million supporters.

Among the signatories: several of cast and crew members from "The Imitation Game."

Under King Henry VIII in 1533, sodomy — or "buggery" as it was also known — became a felony punishable by death.

In 1861, that became the Offences Against the Person Act, which left homosexuality a crime but removed capital punishment in exchange for life imprisonment.

Finally, in 1885, the Labouchere Amendment to the Criminal Law Amendment Act criminalized what it called "gross indecency" for cases when sodomy couldn't be proven. "Gross indecency" wasn't specifically defined.

Since then, activists estimate 49,000 men were convicted.

Turing himself got a posthumous royal pardon in 2013, but his family wants the same extended to others like him.

His great-niece — Rachel Barnes — is delivering the petition. She told the UK's Channel 4:

"It is so unfair and so unjust that the other 49,000 men have been forgotten. It just does not seem right."

And while British Prime Minister David Cameron has supported Turing's pardon before, it's not yet clear whether he'll do the same for the others.

"There is absolutely no doubt that the work in his constituency was absolutely vital in winning the war," Cameron has said.

It doesn't look terribly promising. Last year the UK's Justice Minister Edward Faulks told the BBC mass pardons would have no "practical benefit" while also pointing to the cost of reversing convictions.