'Aladdin' Brings A Whole New World To The Box Office 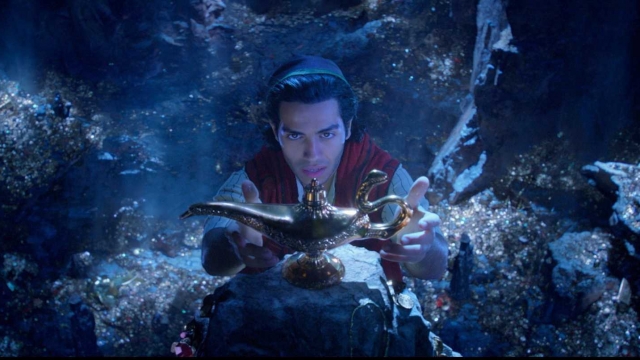 Disney's remake of "Aladdin" as a live-action movie is producing box office wonders.

Simply put, the new "Aladdin" is on a magic carpet ride, soaring past "John Wick 3" to take the No. 1 spot in movie sales.

The film's Memorial Day weekend debut has so far brought in $86.1 million domestically. Worldwide, the film has generated another $207 million.

The sole A-list actor in the remake, Will Smith, dazzles as Genie, reprising Robin Williams' role in the 1992 animated film. Otherwise, lesser-known performers — including Mena Massoud as Aladdin, Naomi Scott as Jasmine and Marwan Kenzari as Jafar — star in the new version. It is part of Disney's pledge to cast Middle Eastern, Asian or Indian actors and actresses in leading roles for the film.

"John Wick: Chapter 3 – Parabellum" took No. 2 with an estimated $24.35 million domestic total at the box office this weekend. The action-packed film is expected to hit a milestone over the long holiday weekend.

An estimated $6 million increase on Monday would push the film's weekend domestic total over $30 million, putting the 10-day total at $107 million.

"John Wick 3" is already the highest grossing film in the Wick franchise. So it's no surprise Lionsgate has already dated "John Wick: Chapter 4" for May 2021.

And in No. 3 is Marvel's cap to the Avenger's franchise: "Avengers: Endgame." The film brought in an estimated $16.8 million to the domestic box office this weekend.

By the end of the holiday weekend, the film is expected to bring in over $800 million domestically. That would surpass "Avatar" on the all time domestic box office list.

And next week, "Stranger Things'" Millie Bobby Brown makes her debut on the big screen with the king of monsters.