What To Expect When Congress Approves The Electoral College Ballots 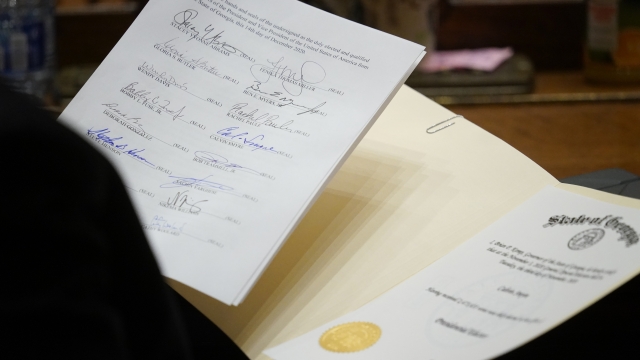 The Electoral College votes have been cast, and the last step in determining the next president happens when Congress counts those votes on Jan. 6. At least one lawmaker already has plans to object.

Rep. Mo Brooks of Alabama says the election results in states like Pennsylvania, Georgia, Nevada and Wisconsin were rife with fraud.

"Every one of them that I am convinced, has an election system that is so defective and unreliable as to make them unworthy of trust in this presidential election," said Brooks.

His claims echo those made in dozens of lawsuits across the country — lawsuits that have repeatedly been dismissed.

"If there’s so much evidence out there of all of this widespread voting fraud, why are there so many judges dismissing the cases for lack of evidence?"

"Because the judicial system is not geared to handle a election contest in a judicious manner. ... Federal judges and state judges have a role. They can have a persuasive influence on public opinion, which in turn, can influence senators and congressmen who render decisions based on public opinion. But the Supreme Court and federal judges are not the final jury, the final judge, or for that matter, the final arbiter, the final arbiter is the United States Congress," said Brooks.

During the joint session in January, lawmakers can object to a state's Electoral College votes. That objection must be issued in writing, and signed by one member of the House and one senator. A senator has yet to publicly support Brooks. But if that happens, both chambers would separate and spend two hours debating the objection before voting on whether or not to accept that state's results.

Four years ago, Democrats tried to object to President Trump's win. But without a proper written objection signed by a lawmaker from each chamber, then-Vice President Joe Biden gaveled down all those attempts.

Proper objections to a state's electoral votes are rare. Federal law says state election results are "conclusive" if states finalize their slate of electors at least six days before the Electoral College meets. That "safe harbor" deadline, which key battleground states appear to have met, is designed to protect states from exactly what Brooks plans to do.

According records filed with the National Archives, the key 2020 battleground states of Arizona, Georgia, Nevada, Michigan, Pennsylvania and Wisconsin all signed their certificates of ascertainment ahead of the safe harbor deadline.

But for Brooks, neither the congressional count nor the failure to prove widespread voter fraud will be enough to call Biden's victory legitimate.

"Will you recognize Joe Biden as the president-elect after Congress votes on Jan 6?"

"If the Joe Biden gets a majority of the votes of the Electoral College, as submitted to Congress and recognized by Congress, yes, he will be the president-elect who did so through massive voter fraud and election theft," said Brooks.