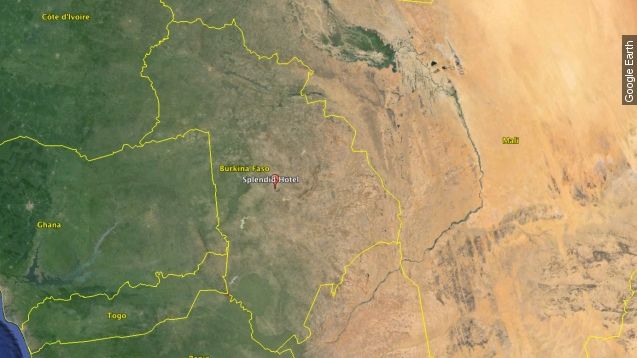 SMS
Al-Qaeda Group Claims Responsibility For Hotel Attack In Burkina Faso
By Matt Picht
By Matt Picht
January 15, 2016
An Al-Qaeda affiliate says it's behind a terrorist attack on a hotel in the capital of Burkina Faso that left several people dead.
SHOW TRANSCRIPT

An Al-Qaeda affiliate has claimed responsibility for a terrorist attack in the capital of Burkina Faso that left several people dead.

Reports from the scene say at least four armed gunman stormed the Splendid Hotel and nearby restaurant in Ouagadougou late Friday, prompting a shootout with security forces. A hospital director in the city told reporters at least 20 people were killed in the attack.

Al-Qaeda in the Islamic Maghreb claims it organized the attack in conjunction with Al-Mourabitoun, a group led by infamous Algerian terrorist Mokhtar Belmokhtar.

If that combination sounds familiar, it's because these two groups claimed responsibility for a similar attack on a hotel in Mali last November. That attack left 22 people dead.