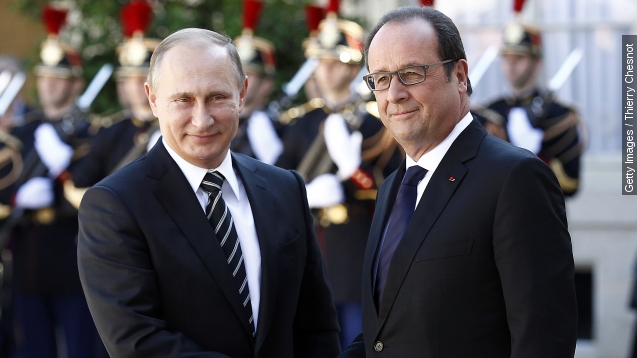 SMS
Airstrikes Prove France And Russia Are Still Uneasy Allies
By Eugene Daniels
By Eugene Daniels
November 20, 2015
Russia and France are teaming up to fight ISIS in Syria. But Russia's allegiance to Syria makes the partnership even more complicated.
SHOW TRANSCRIPT

France and Russia are having a bit of a spat about the legality of a French bombing that hit oil fields controlled by the terrorist group ISIS. Which is interesting, because Russia carried out a similar series of airstrikes this week as well.(Video via Russian Ministry of Defense)

The Russian minister said the country destroyed oil facilities owned by ISIS in another round of bombings. The difference? Russia cleared its strikes with Syria's president, Bashar Assad, ahead of time — something France didn't bother to do. (Video via BBC)

Russia is a clear ally of Syria and Assad, while the French government wants him out of power as much as the United States does. So by calling out France for not getting permission from Assad, Russia is making it clear it's standing behind the Syrian president. (Video via Sky News)

So far, so typical — Russia's been at odds with Western nations over Assad since the Syrian conflict began. But the attacks in Paris, and Russia's supportive outreach to France in response, have shaken that dynamic somewhat.

For example, after a French police dog died in a terror raid Wednesday, Moscow sent the country a German shepherd puppy to replace him. And since the attacks, Russian citizens have flocked to the French Embassy in Moscow, leaving letters, candles and flowers. And you can't forget about the messages "for Paris" being written on some of the bombs Russia is dropping on ISIS territory. (Video via RT)

Russian officials spoke out for more unity against ISIS after the Paris attacks, saying it would team up with Western countries like France and the United States to fight the group. But as long as Western countries keep targeting both ISIS and Assad with their strikes, the awkwardness probably won't go anywhere. Video via France 24,CBS)

But that's not to say Russia's outreach has fallen on deaf ears. French President Francois Hollande is headed to Moscow next week to talk more strategy in the fight against ISIS.