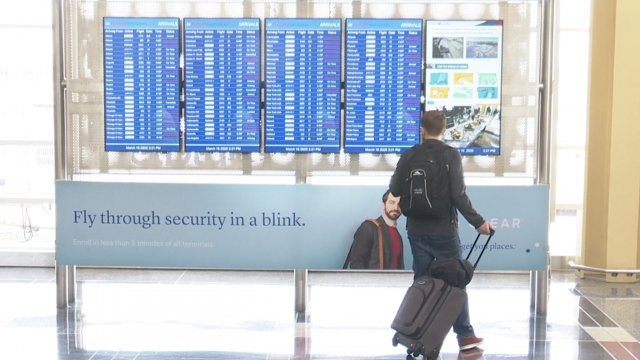 Airlines are canceling flights as the coronavirus keeps Americans at home.

American, United and Delta are all slashing the number of flights indefinitely.

Airlines for America issued a statement Monday saying carriers are seeing a staggering economic impact, with concern things will get worse.

With cash reserves running low, most of the world’s airlines could be bankrupt by the end of May.

Larry Kudlow, head of the National Economic Council, said the Trump administration is talking to the struggling airlines.

"We're in touch with them about their balance sheets and their cash flow," Kudlow said.

They're asking for cash grants, loans and tax relief to stay aloft: $50 billion in aid, according to the Wall Street Journal.

They also want airports to waive landing fees, though airports themselves may soon need help.

International airports in the U.S. are still adjusting to the heavy restrictions on travel from Europe.

Grace Hering flew into Dulles International Airport outside Washington from a study abroad program in Greece.

"I actually think that it was rather poorly executed, as a lot of funnel systems were very crowded areas," she said.

Airlines and passengers are facing the biggest disruption to air travel since 9/11 with no end in sight.