Airlines Want To Cut CO2, But Only If They All Do It At Once 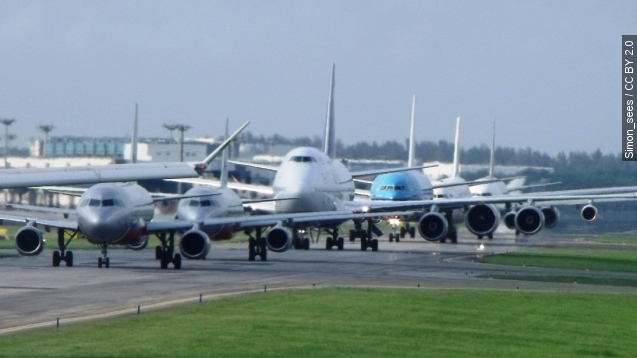 When most delegates head to the U.N.'s climate conference in Paris, they'll also be contributing to climate change. (Video via United Nations)

Commercial air travel produced some 705 million metric tons of CO2 in 2013, meaning if it were a country, it would be among the top 10 emitters in the world.

And like the rest of the top 10, the aviation industry has put forward a plan to cut emissions, with a goal to cut them in half by 2050. (Video via Boeing)

The industry wants an international market where it can buy carbon offsets — investing in carbon-cutting measures to offset carbon emissions.

For example, an airline could buy a certain amount of renewable energy to counterbalance the carbon emissions its flights emitted in a year. (Video via Google)

In an open letter to governments, aviation giants like Boeing and Airbus argued, "A single global carbon offsetting scheme offers the swiftest and most effective approach."

The thing is, it has to be international because most major airlines are, obviously, international and no airline wants to be at a disadvantage. (Video via British Airways)

And all indications are, unless there are major advancements in cleaner fuel, those emissions will continue to grow.

As the global middle class increases, so does demand for air travel, with global demand rising 7.1 percent in August, year over year, according to the International Air Transportation Assocation.

While countries are meeting in Paris to tackle climate change in December, the next meeting of the ICAO isn't for another year.