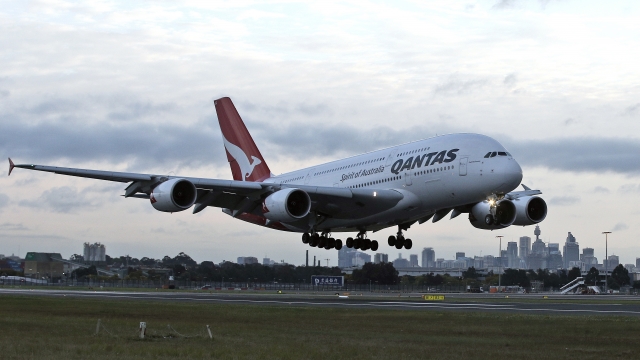 Imagine arriving at the airport … passing through security … finally boarding your flight and taking off … only to land a few hours later — right back where you started.

No. Your plane didn't have a mechanical issue. You actually bought a plane ticket to nowhere.

It's a new kind of air travel that's become popular amid the coronavirus pandemic.

Tariro Mzezewa, reporter for The New York Times: "We know the airline industry — the travel industry overall — hotels, airlines, trains, has just been decimated by the pandemic. So this offers airlines an opportunity to make some money and also keep staff working."

A growing number of airlines — including Qantas in Australia, All Nippon Airways in Japan and Starlux in Taiwan — offer flights that take off and touch down at the same airport — without landing anywhere in between.

Mzezewa: "Barring Australia — for some of the other countries that are doing this successfully — they're small island countries where people have kind of run out of things to do on the ground and they're sort of like, what's the next big thing for me to do that's really cool?"

One man who recently boarded a flight to nowhere on Royal Brunei Airlines called his ticket purchase "a no brainer."

Marul Dzaman Ajimain: "I really miss traveling. … I'm one of the strange ones who really loves long-haul flights."

Passengers who book these 85-minute "Dine and Fly" tickets are served local cuisine while they fly around Brunei.

Not every flight to nowhere is that short, though. Qantas has a seven-hour scenic flight scheduled for Oct. 10 that'll feature views of the Great Barrier Reef, Sydney Harbor and the Uluru monolith. Tickets — which cost between $560 and just over $2,700 — sold out in 10 minutes, according to the airline.

The International Air Transport Association predicts the airline industry as a whole will lose $84 billion this year and almost $16 billion in 2021 because of the pandemic.

But environmental groups say these flights to nowhere should not be the answer for cash-strapped airlines.

Mark Carter, spokesman for Flight Free Australia: "Too many of us are unaware of flying's contribution to the climate crisis. It's the most warming sort-of single thing you could do. And the passengers on Qantas' inaugural flight to nowhere will increase their annual emissions by 10 percent in just seven hours as they fly over the Great Barrier Reef they're helping to destroy because warming is causing these repeated mass bleaching events before the Reef has time to recover."

At least one airline — Singapore Airlines — decided against offering its own scenic flights after backlash over the environmental impact.

Meanwhile, Royal Brunei is using its most fuel-efficient aircraft for its scenic tours, and Qantas indicated it's paying to offset the carbon emissions on its 7-hour flight.

But in the end, some following this trend don't think it has much longevity.

Mzezewa: "I don't think this is something we'll see after the pandemic or when things somewhat go back to normal. … Typically, the planes that are doing this right now are full of passengers who are going places. So it would be quite difficult to try and keep people who are actually traveling to go places on those planes, and then also have these that aren't going anywhere in place."