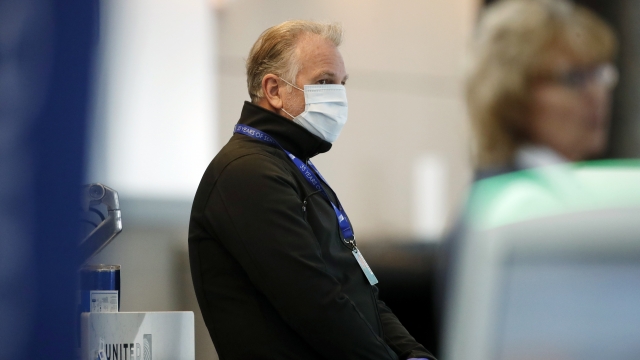 SMS
'It's Critical Right Now': Airline Worker Unions Call For PPE Mandate
By James Packard
By James Packard
April 23, 2020
Airlines say they're working to get personal protective gear to their workers, but it's not required. Employee unions want to change that.

Airline workers want Congress to act. As pilots and flight attendants, among other airline employees, die from the coronavirus, they're worried they aren't getting the protective gear they need.

“What we're asking for is simply the necessary protection to take care of ourselves and take care of our families," Jason Goldberg said. He's a pilot for American Airlines and a spokesperson for the company's pilots' union.

Amid reports of workers at American, FedEx, and JetBlue dying from the virus, unions pleaded with the government for change.

But the FAA said it wasn't in its jurisdiction to mandate CDC guidelines on protecting pilots and flight attendants.

"We are not a public health agency," the FAA said in a letter to the head of the Air Line Pilots' Association, the largest pilots union in the world. "We must look to other U.S. Government agencies for guidance on public and occupational health."

ALPA points out that in 2006, the FAA defined itself a "public health authority" to get access to HIPAA-protected information for research. The agency told Newsy that was a limited designation and that "the notice itself claims no additional regulatory authority."

The FAA is telling airlines to follow the CDC guidelines.

American Airlines is buying masks for a majority of its 130,000 employees, "as quickly as we can obtain supplies without taking any actions that would deprive such necessary supplies from first responders and health care providers."

The airline wouldn't give Newsy a dollar figure on how much it's spending, and said its "focus right now is getting enough masks for all of our team members."

Southwest Airlines said it already has face masks, gloves and sanitizing wipes for its crews and front-line employees. It did not have a dollar amount to provide but said it is "continuously replenishing supplies."

Delta Air Lines said it is providing hand sanitizer, gloves, masks and other protective equipment, though it's not clear to what extent.

"Right now pilots are just kind of piecing it together," Goldberg said. "They're getting masks either from their own personal supply, they're getting them from the flight office, but it's not a sufficient and guaranteed supply of the personal protective equipment that we need."

"If the FAA believes that this is not their purview, we took them at their word that they were not the appropriate authority in this issue," he said. "We decided to take it up the ladder to the lawmakers, to the congressmen and senators and to the president."

The union says it is having conversations with lawmakers about the issue, but it's not clear if it will get an immediate response. Newsy reached out to several members of the House and Senate transportation committees but did not hear back.