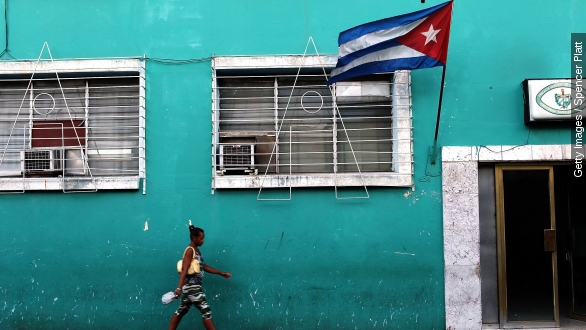 SMS
Airbnb Comes To Cuba, Despite Patchy Cuban Internet
By Kate Grumke
By Kate Grumke
April 2, 2015
Airbnb now has places to stay in Cuba, despite only about 26 percent of the population having access to the Internet.
SHOW TRANSCRIPT

As Americans begin to fantasize about travel in Cuba, they now have a new option for finding places to stay — Airbnb.

The site has more than 600 listings in Havana for people hoping to stay somewhere other than a hotel or resort.

But there's a catch: most Cubans have pretty spotty Internet access. That doesn't exactly spell success for an Internet-based company.

Central to booking an Airbnb is being able to contact your host throughout the process to coordinate your stay.

"If you have any questions you can message the host directly, through Airbnb."

But according to the watchdog organization Freedom House, about 26% of the population in Cuba has access to government-run internet — and only about 5% have access to a free and uncensored World Wide Web.

The group writes, "Internet access in Cuba is complicated by weak infrastructure and tight government control."

To get the Internet, most Cubans have to head to a local internet cafe — where the wait is long and time online is expensive.

And NPR's Robert Siegel reports on how hard it is to get a connection at the offices of Internet companies:

"They spend about 45 minutes getting to this place, then they waited in line for access to a computer inside, only to find that the connection was down."

But a co-founder of Airbnb told the BBC despite Internet issues, the company is taking advantage of an already rich home sharing tradition in Cuba.

"This is probably the only country that I'm aware of that has such a rich tradition in homesharing. There, it's known as casas particulares. So this is an existing network that we were able to plug into very quickly," Nathan Blecharczyk said.

So far, Cuban Airbnb listing are only available to book for Americans. The average price per night is $44 in Havana.