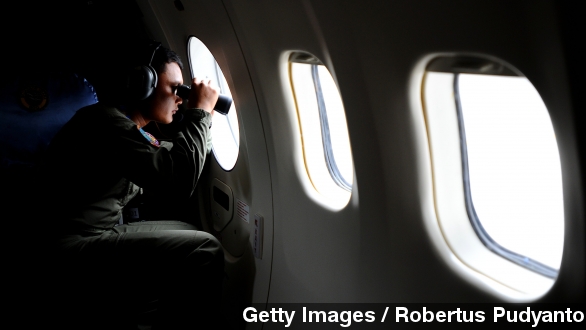 Search and rescue teams have found four large pieces of wreckage believed to be parts of AirAsia flight QZ8501.

The plane disappeared last Sunday after leaving Indonesia with 162 people on board. So far, at least 30 bodies have been recovered in the search.

All of the objects are in the priority search area in the Java Sea and are relatively close together. The largest object is said to be 59 feet long.

The objects were detected by sonar from an Indonesian Navy Ship, and search and rescue officials have lowered a remotely operated underwater vehicle to examine the objects.

Most of the bodies from the crash are believed to be trapped in the plane's main passenger section — which could be what the recently discovered object are — but because of poor weather conditions, the bodies have still not been recovered.

Channel NewsAsia reports strong currents were making it difficult to operate the underwater vehicle that was attempting to examine the wreckage.

And, for now, diving is also out of the question.

"There are dozens of divers sitting on deck not able to get in the water because it's simply too dangerous," Paula Handocks said.

The cause of the crash is still unknown, but most experts are saying that severe weather played a role.