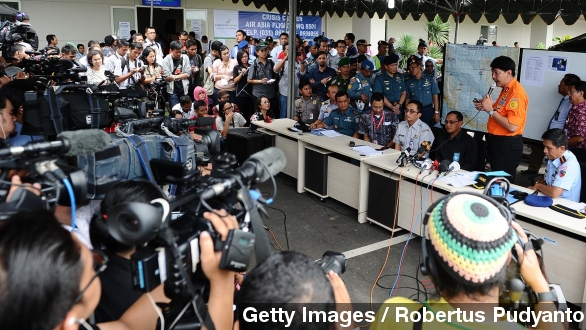 SMS
AirAsia 'Bottom Of The Sea' Comment Assumes Flight Crashed
By Cliff Judy
By Cliff Judy
December 29, 2014
Indonesian officials say they believe AirAsia flight 8501 is likely "at the bottom of the sea" and planes believing they spotted debris were wrong.
SHOW TRANSCRIPT

The search for AirAsia flight QZ8501 may effectively be in vain as an Indonesia official said Monday investigators believe the plane carrying 162 people is likely "at the bottom of the sea."

The plane disappeared Sunday en route from Surabaya to Singapore after the pilot requested permission to fly at a higher altitude because of clouds. While Australian planes at one point believed they'd spotted debris, the Indonesian vice president has since said in a press conference that debris was not part of AirAsia 8501. (Video via Arirang)

The vice president and search and rescue officials briefed reporters Monday. The head of the country's search and rescue agency said, "Based on the co-ordinates given to us and evaluation that the estimated crash position is in the sea, the hypothesis is the plane is at the bottom of the sea." (Video via CNN / TV One / Trans 7)

The statements are obviously presumptive, and there's been no definitive cause for the plane's disappearance since officials say the crew never sent a distress signal after asking to fly higher. Officials have said the pilot's request was denied because of at least one other plane nearby.

A BBC reporter, who spoke with officials, says the "bottom of the sea" comment so soon after the plane disappeared is more about continually updating the public than solid knowledge of what happened to it.

"Officials simply have no idea where the plane is right now, but they want to give as much and as many updates as possible to reassure the family members, in particular," said BBC's Alice Budisatrijo.

Time reports the company has a solid reputation in the industry and CEO Tony Fernandes took over the airline in 2001 when it only had two planes.

An Australia-based aviation expert told Time, "AirAsia are considered to be quite well funded and apparently Tony Fernandes is a stickler for safety and good maintenance. There are no black marks against them at this point in time."