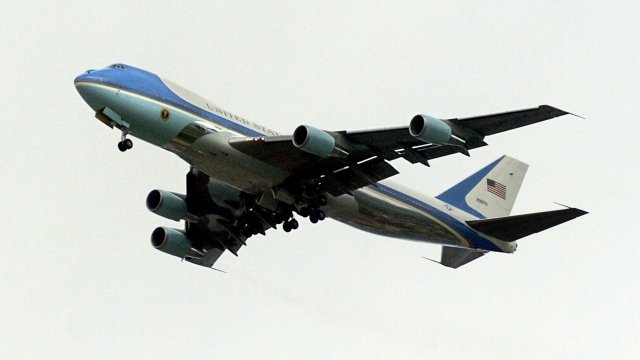 SMS
Air Force Cancels $24M Refrigerators For Air Force One
By Katherine Biek
By Katherine Biek
June 5, 2018
The Secretary of the Air Force told one congressman that the pricey contract was canceled because it made "the most prudent fiscal sense."
SHOW TRANSCRIPT

The U.S. Air Force is canceling a $24 million contract for new refrigerators for Air Force One.

On Monday, Rep. Joe Courtney released a letter he received from Air Force Secretary Heather Wilson saying the cancellation made "the most prudent fiscal sense for the government."

Back in December, the Defense Department revealed it had awarded Boeing a $23.7 million contract to replace two refrigerator units on the president's plane.

These are pretty fancy refrigerators, though. Defense One reports the so-called "chillers" need to store about 3,000 meals at any one time because Air Force One is required to be able to feed everyone on board for weeks without restocking.

Wilson said the decision to terminate the contract was made by both the Air Force and the White House Military Office.

Courtney praised the cancellation, saying in a statement that the "sole-source contract just didn't pass the smell test."

Wilson did note that if the new Air Force One planes that Boeing is contracted to build are somehow delayed, they'll "need to relook at" replacing the current plane's refrigerators.